Listed companies have strong quarter, though sales down

Listed companies have strong quarter, though sales down 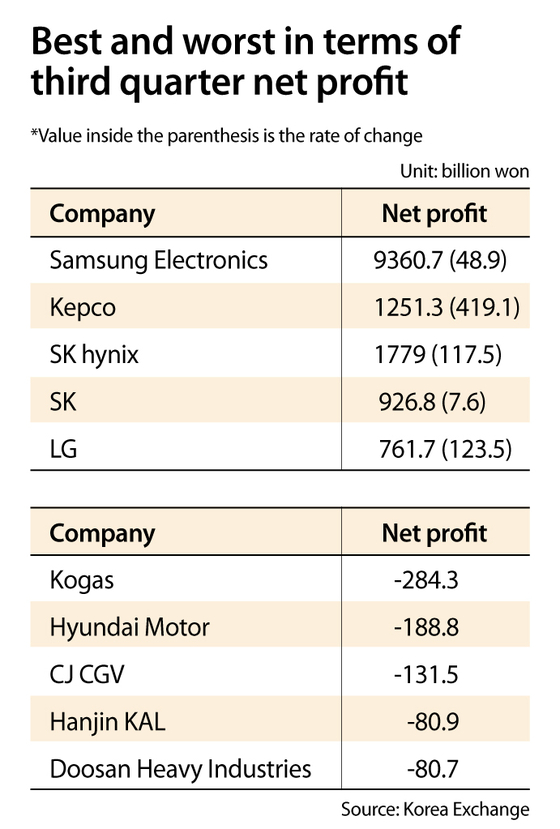 The Korea Exchange released its analysis of the third-quarter net profits of 590 public corporations on Wednesday based on their consolidated financial statements. The combined sales of the corporations, which totaled 503.647 trillion won ($451.6 billion), was down by 2.5 percent on year. Operating income rose by 27.5 percent, while net profit was up 44.5 percent to 25.6 trillion won.

During the third quarter, the operating margins — operating profit to sales ratio —was 7.25 percent. The value, which indicates the corporation’s profitability, is 1.71 percentage points higher than that of the same period last year. It means that the companies earned 554 won for 10,000 won in sales last year, but this year made 725 won for the same amount of sales.

Export items like semiconductors, which rebounded from the coronavirus shock, drove performance. Samsung Electronics, No. 1 on the Kospi market for market capitalization value, took the lead by recording 9.4 trillion won in net profit, which is 48.9 percent higher than last year. For other surveyed public companies, the rise was 15.7 percent for operating income and 42.1 percent for net profit. In terms of industries, 14 out of 17 industries reported increases in net profit.

For the food and beverage industry, the net profit growth was 85.5 percent. The growth is seen as a result of the increase in customers who shop for groceries and dine at home. The rates of increase for telecommunications, electronics and retail industries were also high. The transportation and warehouse industries, including airlines, returned to the black during the third quarter. Yet, net profit for transportation equipment and construction declined.

Although the companies did well in terms of earnings, the cumulative results from the first to third quarter remained low, still feeling the impact of the coronavirus pandemic. Besides Samsung Electronics, the aggregate operating income of publicly listed companies from the first to third quarter was 18.8 percent lower than a year ago. For Samsung Electronics, the performance was down 6.8 percent.

The third-quarter performance of the Kosdaq market was also in a recovery trend. The third-quarter sales of 958 publicly listed companies was 50.67 trillion won, a 5.3 percent on-year increase. The operating income rose by 31.4 percent, and net profit rose by 3.9 percent. The ratio of operating income to sales was 7 percent, 1.39 percent higher than the same period last year.

Securities firms expect the performance to improve throughout the fourth quarter. According to financial information provider FnGuide, the estimate for fourth-quarter operating profit for companies listed on the Kospi is around 36 trillion won, which is near the third-quarter value. The variable in the equation is the possibility of another major spread of the coronavirus.

“The coronavirus spread is becoming increasingly intense not only in Korea, but also in the United States and Europe. Company performance may take a hit affected by the strength and duration of the resurgence,” said Jung Yong-taek, a senior researcher at IBK Securities. “The polarization of results by industry is also an area to carefully look into.”

The weakening of the dollar and strengthening of the won can also burden local companies that mainly export. The value of the won, which hovered in the 1,160-won to 1,200-won range per dollar, has recently approached 1,100 won. The won closed at 1,103.8 won per dollar, down 2.8 won from the previous day’s close.