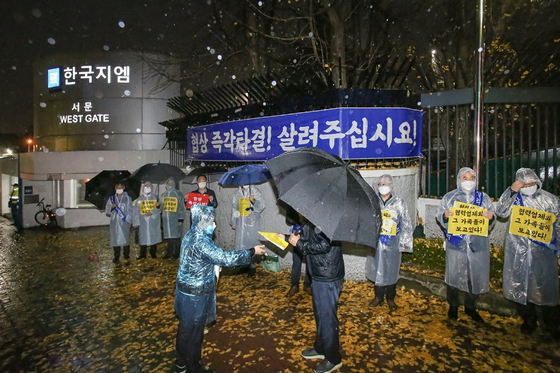 Some 100 executives and employees of GM Korea suppliers staged a demonstration Thursday morning, pleading for the union and management to come to terms on wages. [GM KOREA SUPPLIER ASSOCIATION]


Suppliers of GM Korea said Thursday they are on the verge of going bankrupt and urged management and labor to come to terms to end a rolling strike.

The Detroit headquarters also warned that the industrial action was "making the country non-competitive."

Some 100 executives and employees of GM Korea suppliers staged a demonstration Thursday morning at the automaker’s Bupyeong plant in Incheon.


“If negotiations don’t come to terms right away, suppliers that don't have enough liquidity are going to face bankruptcy,” said the GM Korea Supplier Association in a statement Thursday.

"Some of the suppliers are not able to pay their utility bills or salaries for their workers. Second or third-tier suppliers are giving up on the business."

Management and labor started annual wage negotiations in July and went through 24 sessions. Management offered a base wage freeze and bonus pay of 8 million won ($7,200) over two years until 2021. The union is demanding a raise in the base wage and a detailed plan of which new models will be made on the Bupyeong production line. It is also demanding a 22-million-won bonus payment for this year.

The union has been staging two four-hour walkouts every working day since Oct. 30.

According to GM Korea, the walkouts have prevented production of some 20,000 units at the Bupyeong plant.

Covid-19 disrupted production at GM Korea in the first half of this year. According to the automaker, some 60,000 units of cars couldn't be manufactured as scheduled.

It has been only two years since GM Korea shut down one of its plants due to mounting losses and almost went bankrupt.


It was saved by the Korea Development Bank in 2018 when the state-owned bank injected $750 million by buying new shares of the company while the Detroit headquarter agreed to provide $3.6 billion in fresh loans. The deal also prohibits GM from withdrawing from Korea over the next 10 years.

"We are losing confidence that we're going to be able to continue to invest in that country," said Steve Kiefer, president of GM's international operations in an exclusive interview with Reuters on Wednesday. "We're basically being held hostage in the short term by lack of vehicle production."

Chevy to the levy

GM to add Tahoe SUV to Korean lineup next month