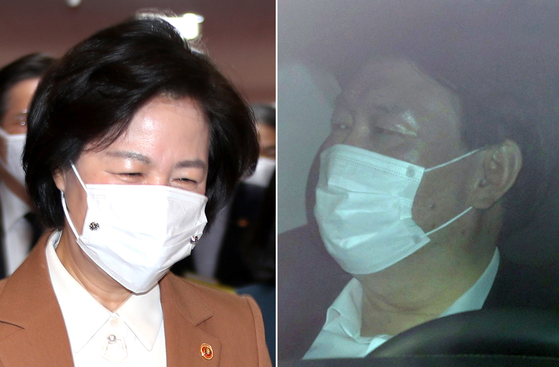 
Prosecutor General Yoon Seok-youl rejected an unorthodox request by the Ministry of Justice to conduct an audit interview in person, which his office claimed was an attempt by the ministry to shame the country’s top prosecutor.

Calling the Supreme Prosecutors’ Office “uncooperative” in regards to its audit, the Justice Ministry Thursday afternoon said it would not be conducting the interview, but that it would proceed with its investigation into Yoon according to protocol.

Though another high-profile clash between Yoon and Justice Minister Choo Mi-ae may have been narrowly averted, the friction surrounding the interview speaks to the hostility that has grown between the two organs as their chiefs continue to clash publicly.

On the order of Justice Minister Choo Mi-ae, the ministry has been conducting wide-ranging investigations into alleged misconduct by Yoon, including that he deliberately covered up suspicions of criminal activity by opposition figures involved in a major financial scandal, along with accusations surrounding his wife and mother-in-law.

Without prior warning on Monday, the Justice Ministry informed the Supreme Prosecutors' Office it would hold an audit interview with Yoon on Thursday afternoon.

Two prosecutors dispatched by the ministry subsequently arrived Tuesday to inform Yoon of the schedule for the interview, but Yoon’s office objected to the meeting, claiming the process went against protocol.

According to prosecutorial sources, a regular state prosecutor called the top prosecutors' office Thursday and asked to speak to Yoon, identifying himself as a subordinate to Park Eun-jeong, a senior official at the Justice Ministry and close aide to Choo.

This again was rebuffed by Yoon’s office, which said the prosecutor general would answer all the ministry’s questions in written form, per official guidelines.

But the Justice Ministry’s actual guidelines dictate that those under audit must cooperate with an investigation by replying to all questions and showing up to required meetings. They do not draw a distinction as to whether these rules apply differently to senior prosecutors as opposed to regular members of the state prosecution service.

In a public statement Thursday, the ministry said the interview ultimately could not take place because Yoon’s office failed to respond in spite of repeated prior notices.

“Regarding this case, the Justice Ministry will proceed forward according to the law and principle, as there cannot be any exceptions made for those with high rank in an investigation on misconduct,” the statement read.

For the ministry to investigate a sitting prosecutor general is unprecedented. Many analysts regard the probe as Choo’s attempt to push Yoon out of office for pushing back against the Moon Jae-in administration’s prosecutorial reform drive.
But reform supporters say it was the state prosecution service under Yoon that fired the first salvo in the conflict.

Last year, when President Moon appointed his close ally and Presidential Secretary Cho Kuk, the de facto architect of the reforms, as justice minister, Yoon ordered a massive investigation into the nominee and his family on suspected academic and financial irregularities.

Many critics of the prosecutor said the large scale of the probe did not match the seriousness of the allegations, with the investigation being on par with those mounted on major presidential corruption scandals or murder cases.

While the internecine feud has driven up tensions between the government and state prosecution service to unforeseen levels in Korean politics, for Yoon personally, the conflict has been a boon.

Polls show the prosecutor general leading all opposition figures for the 2022 presidential race, and closely trailing contenders from the ruling party.