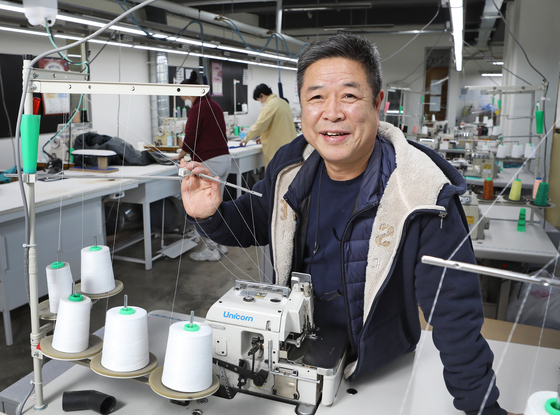 Lee Sang-tae, chairman of the Korea Sewing Fashion Association and the Sewing Design Eeum Cooperative, talks with the Korea JoongAng Daily earlier this month at Co-working Factory in Yongsan District, central Seoul, which remodeling work was funded by the Seoul Metropolitan Government to connect nearby seamsters and seamstresses with outsiders to help raise interest in the local sewing business. [PARK SANG-MOON]

Five years ago when the Seoul Metropolitan Government rolled out plans to convert a dilapidated overpass into a pedestrian walkway in the middle of the capital near one of the busiest roads, a huge outcry from nearby sewing factories ensued.

By building a Seoul equivalent to New York City's High Line, the metropolitan government wanted to encourage people to reduce their carbon footprints. But for several hundred sewing businesses in Cheongpa-dong and Seogye-dong in Yongsan District, central Seoul, the project had nothing to do with saving the environment.

The two neighborhoods represented one of Seoul’s densest concentrations of sewing factories, and almost all of their supplies went to Dongdaemun Market in the neighboring Jongno District, which only took 10 minutes to get to by car via the overpass.

Without the overpass, the factories would have to make a detour that would rack up extra transportation fees.

Despite the fierce backlash, the new walkway opened in May 2017 under the name Seoullo 7017. Lee Sang-tae, 57, who runs a sewing factory in Cheongpa-dong, said it now takes him 15 to 20 minutes longer to get to Dongdaemun — and 40 minutes longer during rush hour.

“Without the overpass, I was afraid this area would become some sort of island,” detached from the rest of the city, said Lee, who’s been in the sewing business for nearly four decades.

Yet even after their main access to Dongdaemun Market was cut off, some factories unexpectedly found hope in the one place they thought had caused the whole inconvenience — City Hall.

Since 2015, the city government has allocated some 60 billion won ($53 million) to various projects around the Seoullo 7017 area as part of the capital’s Urban Regeneration Model, a broader initiative to "remodel" outdated infrastructure in the city to revitalize local communities.

In the Korean context, to remodel a building is to change its physical structures while retaining its basic framework.

A part of that fund was earmarked for efforts to stimulate the sewing industry in the Seogye-Cheongpa zone, chiefly by remodeling a shabby building, paying rent and filling the space with rented sewing equipment to create a co-working environment where local seamsters and seamstresses can collaborate with outsiders and ultimately raise interest in the sewing business.

As chairman of the Korea Sewing Fashion Association and the Sewing Design Eeum Cooperative, Lee was part of the entire journey from day one, playing the role of conduit between the Seoul Metropolitan Government and local sewing businesses, while helping the city government organize most of its Seogye-Cheongpa regeneration projects on the ground.

Lee estimated that 500 to 600 non-professionals from outside the region have visited the Fashion Makerspace and Co-working Factory over the past two years since the 415-square-meter (125 pyeong or 4,467 square foot) space opened in late 2018 on the second floor of an old building in Malli Market.

Fashion Makerspace, which takes up one side of the remodeled area, has mainly been used as a public workshop where people get together while participating in city-funded regeneration programs, including one that had to do with launching a new fashion brand named Agoing. 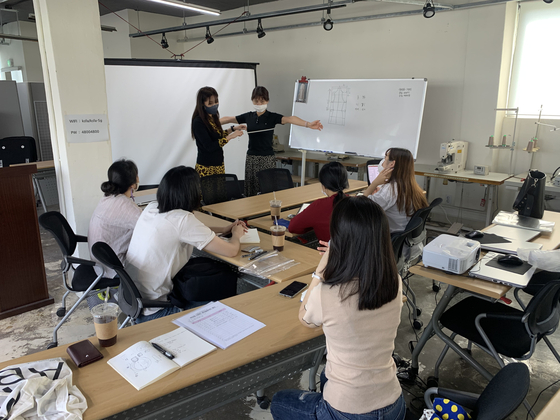 Young designers of Agoing, a fashion brand funded by the Seoul Metropolitan Government, gather at Maker Space in Yongsan District for a workshop. The area was also remodeled using city funds. [URBAN REGENERATION CENTER OF THE SEOUL METROPOLITAN GOVERNMENT]


On the other side of the remodeled floor is Co-working Factory, a sewing school partly funded by the city government, where seamstress and seamster hopefuls have been receiving a free semester of education, after which some have opened their own businesses or found employment as assistants in one of the sewing factories of Seogye and Cheongpa-dong.

The projects came at a critical time for the Seogye-Cheongpa sewing industry, as factory owners were nearing retirement — most are currently aged in their 50s or above — and they didn’t have a younger generation to pass their know-how to. Young people would ask for a job, but then work less than three years before complaining about the heavy workload and leaving, which made factory owners unmotivated to train rookies, Lee said.

If anything, Lee said, the Seoul-funded regeneration projects have changed the mindsets of many people in the local sewing industry as they mingled with outsiders and young college students hoping to pursue a career in fashion design. A great deal of bonding happened at the Sewing Design Eeum Cooperative, which Lee established last year to link young designers with seamsters and seamstresses in the Seogye-Cheongpa area to work on the city-funded Agoing fashion brand.

“People used to call me crazy,” Lee said, recalling his early days running the cooperative. “People used to ask why I was going out of my way to establish a cooperative with my own money, when no one would even welcome it.”

Now, the skeptical voices have dialed down a lot.

“I think many people here have come to realize that even if they’re not directly involved [in the city projects], others who are involved will eventually pave the way for the younger generation” to lead the sewing industry, said Lee.

“Not everyone has changed their attitudes, but the cooperative has enabled many people to open up to the possibility.”

After a year working with the cooperative and designing clothes for Agoing, Bang Ha-jeong, 23, a fashion design major at Seoul Women’s University in Nowon District, northern Seoul, said she learned much about the art of cooperation.

“The sewing masters were really helpful,” said Bang. “It’s not easy for older people to communicate with young people with no experience, and they could have resisted taking requests from us when we told them how the clothes should be made, but they were really patient and gave us some good advice in case they disagreed.”

Throughout the past year working on Agoing, Bang said one of her most memorable moments was when she saw models wearing her clothes on the runway during a city government-funded fashion show late last year. She was later able to sell the clothes in a pop-up store. 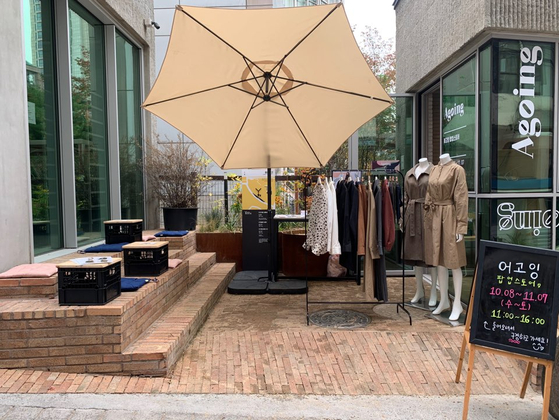 
This year’s spring/summer collection was canceled due to the coronavirus pandemic, but the fall/winter collection was sold in another pop-up store for a month before wrapping up early this month. Her clothes are now available online.

The Seoul Metropolitan Government’s five-year regeneration projects around Seoullo 7017 are scheduled to end by the end of December, though the city government plans to continue some funding to help the programs live on, including rent for the Fashion Makerspace and Co-working Factory.

That means Lee will soon have some crucial decisions to make. 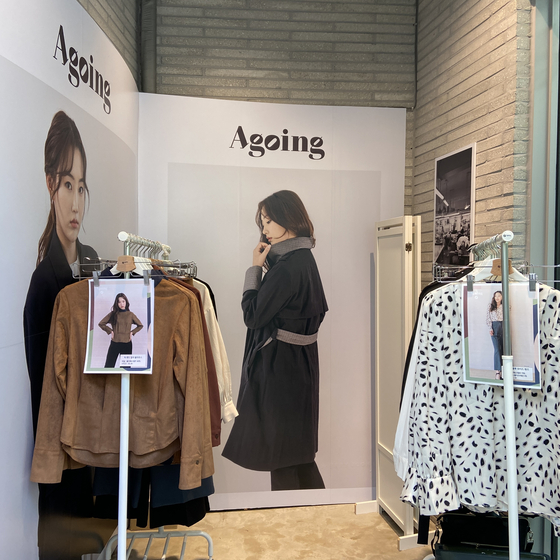 
For one, Agoing has yet to turn a profit, but Lee said he’s not ready to let it go. In a neighborhood where almost all sewing factories don’t have their own fashion brand and instead supply clothes to wholesale stores in Dongdaemun Market upon order, Lee said the very purpose of establishing Agoing was to have something these factory owners could call their own.

The city government’s direct funding of the brand will be reduced, but Lee said he’s determined to make it through next year alongside his members of the cooperative.