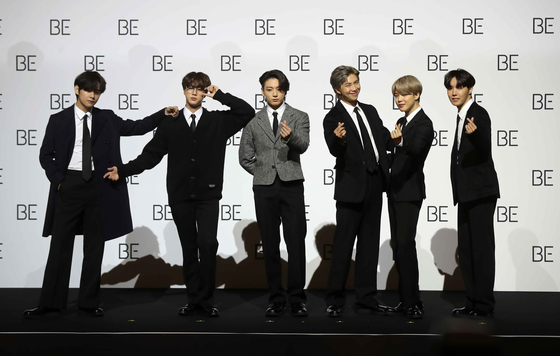 BTS is posing for the camera at a global press conference hosted at the Dongdaemun Design Plaza in central Seoul Friday to promote their fifth full album, ″BE (Deluxe Edition).″ [JOONGANG ILBO]

Boy band BTS hopes to offer some consolation to those suffering amid the Covid-19 pandemic by saying, "life goes on.”

That phrase is the recurring theme of the band's fifth full-length album “BE (Deluxe Edition)” which dropped worldwide today at 2 p.m. Including record-breaking single “Dynamite,” the album features a total of eight tracks. 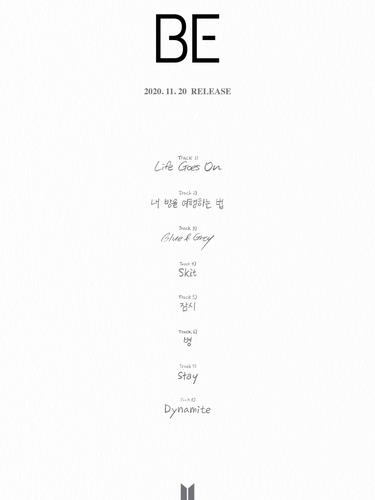 Tracklist for the album ″BE (Deluxe Edition).″ [BIG HIT ENTERTAINMENT]


Six of the seven members took part in an offline press event at Dongdaemun Design Plaza (DDP) in central Seoul Friday, the first time in many months where they were able to take questions from the press. Suga was unable to attend as he is currently recovering from a shoulder surgery which he underwent earlier this month.

The event was divided into two sections: The first saw the members explain the overall concept and go through the meaning of each of their tracks, as well as answer questions from foreign press, all of which was livestreamed via BTS's YouTube channel BangtanTV. 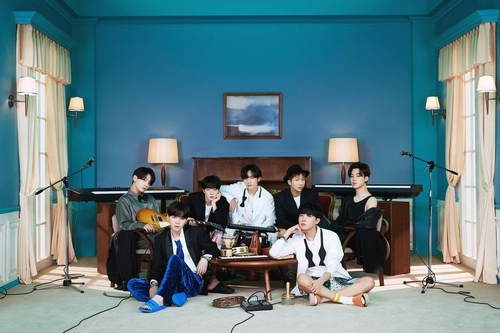 
The latter half was conducted off-screen with members taking questions from the local press that covered everything from the corona blues stemming from the cancelation of their world tour concerts to their future goals, and more imminently their hopes for a Grammy Award nomination and ultimately a win.

“As for me, I was really devastated [when Covid-19 took a toll on our concert schedules],” Jimin said. “Meeting the fans on stage means a lot to me, and that was what I really wanted to do and something that I felt I had to do. When the time came and I couldn’t do that, I didn’t know who I was [anymore]. That’s why this album [also] comforted me. We would gather together to talk about the theme of the album, go out for a drink, and that really consoled us. It also made me look back on why I love doing what I do, and reminded me why I had to work hard even in this kind of situation.”

The releases of “Dynamite” and their fifth album “BE” were completely spontaneous after the band's 2020 schedule was shattered by the coronavirus, the members admitted.

“When we come up with the concepts for our albums, it has always been about our current state of emotions, our thoughts and what message we want to express — so to be honest, we did not know what we were going to do after we wrapped ‘Map of the Soul: 7,” RM said. “[But] the root of ‘Dynamite’ and ‘Be’ is the same — both came from our efforts to try to comfort the listeners. While ‘Dynamite’ is a [more] cheery disco-pop track, our album ‘BE’ is more toned down and serious. We tried to console the listeners by stating a dignified truth in our own way.”

Following the release of the album, BTS is now highly anticipating the announcement of the nominees for the upcoming Grammy Awards, set to be revealed by the Recording Academy at 2 a.m. on Nov. 25.

“One of the best and most memorable performances was the 2009 Grammy Awards when artists Kanye West, Jay-Z, Lil Wayne and MIA, clad in suits, performed ‘Swagger Like Us,’” RM said. “It was when we were still trainees, and it really motivated and inspired us when we practiced. I think, over a long time, it’s been vaguely formed to become our dream [to perform at the Grammys].”

“I know it might be too much [to ask] and maybe too ambitious, but since we’re a group, I dare to hope that we can be nominated and receive a prize in a group-related category,” J-Hope said. “We’ve always set our goals based as a team, and it’s what’s so important to us. I think I’ll cry if we receive a prize.”

The members also spoke about their upcoming military service, which has been the topic of heated debate over whether or not they should be offered an alternative to the required service for their massive economic and cultural impact. However, the members were united on the matter, saying they will be ready to enlist when duty calls.

“As a Korean youth, military service is a natural duty that, as we have always stated, we’re ready to oblige whenever the country calls upon us,” Jin said, as the oldest member of the group. “We actually talk about this a lot, but all of us are planning to serve in the military [when the time comes].”

Despite the pandemic, BTS can still count 2020 as a success.

Its title track “On” from “Map of the Soul: 7” debuted at No. 4 on the Billboard Hot 100 chart, and its English single “Dynamite” broke its own record and topped the chart for three consecutive weeks, making a significant mark on K-pop history.

“[But] whether this means that K-pop has safely landed within the boundary of the mainstream American pop industry, or to what extent [the songs can] be considered K-pop, [still remains a question],” RM said.

“[For instance,] when a Korean band sings a song in English, can this still be categorized as K-pop? A lot of the boundaries related to nationalities and also within the music industry are toppling, and although I can’t give a straight answer, I hope our achievements can provide a gateway for those in less mainstream groups. I don’t even know if I’m in the position to say this, but for us, there are [now] a lot of moments when we can forget the position that we’re in as BTS. In order for us to continuously create meaningful results, we need to put both of our feet on the ground and [consistently] remind ourselves of who we are. That’s how we can leave a memorable impression on the world and offer, even if only just for a moment, comfort to the world. That’s our job, and our business.”