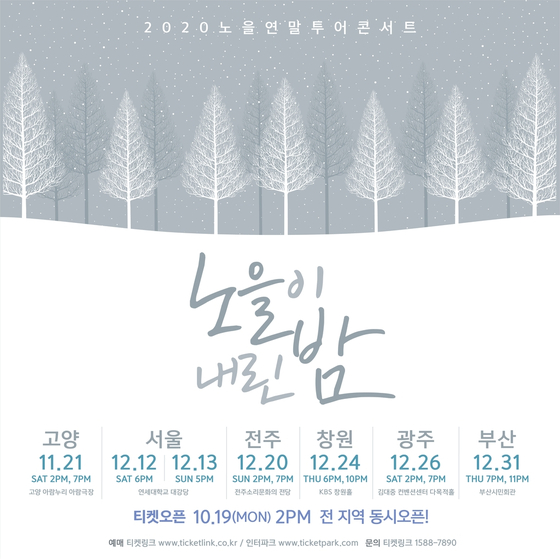 
A range of music concerts were canceled following the government's announcement that it would raise the level of social distancing to Level 1.5 in metropolitan areas.

Vocal group Noel canceled its end-of-the-year concert tour, the first concert of which was scheduled to take place on Saturday at Goyang Aram Nuri Arts Center’s Aram Theater in Gyeonggi.

“We were meticulously preparing for the concert abiding by the social distancing guidelines provided by the government and the facility, but due to an explosive increase of coronavirus infections and escalation in social distancing level to Level 1.5, we had no choice but to cancel the concert,” the group’s agency C-Jes Entertainment announced on its social media channels. “We are sorry to have inconvenienced the audience who had already reserved the tickets.”

The band Jaurim also canceled its concerts scheduled from Nov. 27 to 29 at Olympic Park.

“We received a notice after the social distancing level was raised that for pop culture concerts, it is no longer possible to have more than 100 people [at a gathering],” the band said through its Instagram account. “So we can no longer go ahead with our upcoming concert.”

The “Mr. Trot” concert in KSPO Dome in Songpa District, southern Seoul, supposed to be held from Friday to Sunday this week, was delayed indefinitely. The Gangneung tour for next weekend was also postponed.