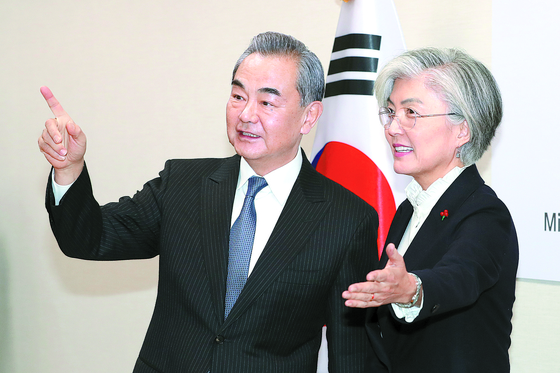 
Chinese Foreign Minister Wang Yi may visit Korea as soon as Nov. 25, according to diplomatic sources.

The possible visit, which Seoul’s Ministry of Foreign Affairs said was still being negotiated, would be the first time Beijing’s top diplomat has visited Korea since Joe Biden beat incumbent President Donald Trump in the U.S. election earlier this month.

Japan’s Jiji Press on Thursday reported Wang was also set to visit Tokyo from Nov. 24 to 25, and was due to meet with Japanese Prime Minister Yoshihide Suga. Sources in Korea said the Chinese foreign minister would follow this up by visiting Seoul on Nov. 25.

China’s Foreign Ministry has not yet confirmed the visit, noting discussions surrounding the schedule were ongoing. Wang reportedly planned to visit Korea and Japan in October, but later deferred the plan due to a key meeting of the ruling Chinese Communist Party that month, and the U.S. presidential election on Nov. 3.

Wang last visited Korea in December 2019. The only high-ranking figure of the Chinese government to visit Seoul since the global Covid-19 outbreak was Yang Jiechi, a member of the Political Bureau of the Communist Party's Central Committee, who came to Busan in August.

Yang at the time met Suh Hoon, then Seoul’s National Intelligence Service director, agreeing to work toward a visit by Chinese President Xi Jinping to Korea in the near future. But the pandemic forced the state visit by Xi to be postponed multiple times.

Seoul is also working to hold a trilateral summit with China and Japan in December as scheduled, though Suga has reportedly refused to attend unless Korea compromises on the issue of Korean wartime forced labor.

Beijing has also customarily been represented by Chinese Premier Lee Keqiang rather than Xi during annual trilateral summits, meaning a visit by Xi would be separate from the occasion.

China’s outreach raised eyebrows in light of the power shift in Washington, which China has been observing with great attention. It is not known to what extent Biden will continue his predecessor’s hard-line approach to Beijing, but the president-elect has made clear he would push for greater cooperation with U.S. allies like Korea in the region.

Wang may carry a message to Seoul warning it not to turn its back on China, Korea’s biggest trade partner, amid expectations that the new administration in Washington may attempt to enlist allies in a closer concerted effort to pressure Beijing.