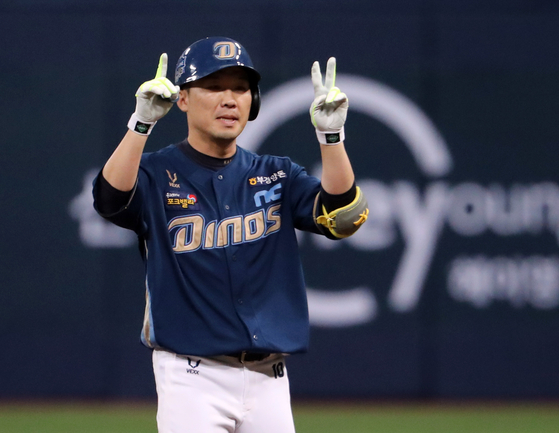 Chi Seok-hoon celebrates after scoring his first-ever RBI during Game 4 of the Korean Series against the Doosan Bears at Gocheok Sky Dome in western Seoul on Saturday. [YONHAP]


The Korean Series is tied again.

By picking up a 2-0 victory against the Doosan Bears, the NC Dinos have now tied the series with two wins and two losses for each team.

With the Bears starting Kim Min-gyu on the mound and the NC Dinos starting Song Myung-gi, Saturday was very different from Friday's game, which was all about scoring runs. In Game 4, both teams’ batting lineup struggled to score until the top of the sixth inning.

After grinding out leadoff Park Min-woo, Kim allowed a single to Dinos’ outfielder Lee Myung-ki. This pulled Kim off the mound and the Bears brought in Lee Young-ha. Lee started out strong by grounding out Na Sung-bum but it all went wrong after that.

Lee allowed a single to Dinos catcher Yang Eui-ji, good enough to bring Lee home to add the first run of the day. Due to a throwing error to the Bears' catcher from the right field, this allowed Yang to advance to second base.

A wild pitch by Lee allowed Yang to once again get to third base, and by giving up another single to Kang Jin-sung, the Dinos extended their lead to 2-0.

The Dinos weren’t done. At the top of the ninth inning, Bears pitcher Lee Seung-jin started out the inning strong by taking the first two out counts. But he struggled with the last out. Lee first allowed a single to Aaron Altherr. With Chi Seok-hoon in the batting box, Altherr successfully stole second base. The 36-year-old veteran Chi then hit a double, his first-ever hit in the Korean Series.

A double from Chi was good enough for the Dinos to extend their lead to 3-0.

During the game, the Dinos manager put Drew Rucinski on the mound from the bullpen at the bottom of the seventh inning, and that also turned out to be the right choice, as he tossed two and two-thirds scoreless innings while striking out four. Rucinski tossed 39 pitches.

As the Bears won Game 3 with a 7-6 victory, the Korean Series is once again squared with two wins and two losses.

After a day off, Game 5 will resume at Gocheok Sky Dome in western Seoul on Monday.

In Game 5, Doosan will have Chris Flexen on the mound while the Dinos will have Koo Chang-mo. For both teams, it's an interesting selection for their starters as they both decided to go with Game 2 starters rather than Game 1.

For the Dinos, it makes sense as their No. 1 starter Rucinski tossed two and two-thirds innings in Game 4 as a bullpen pitcher. By tossing scoreless innings, Rucinski picked up a save. In his very first start in the Korean Series in Game 1, Rucinski also picked up a win. Throughout five and one-third innings, Rucinski gave up three runs and walked three while striking out four with a 1.69 ERA.

Although Rucinski made a surprise appearance in the bullpen, Dinos manager Lee Dong-woo made it clear that his next appearance will be as a starter.

"I thought about lifting him in the ninth inning," Lee was quoted as saying on Yonhap. "But he said he wanted to close it out. But he still belongs in the rotation. His next outing will be as a starter."

Koo didn't have as strong start as Rucinski, but still made a strong debut in the Korean Series. He had to walk away with a loss after tossing six innings. But looking at those six, it wasn't too bad as he gave up three runs, two unearned runs, walked two and struck out seven with a 3.00 ERA.

While the Dinos have Koo on the mound, for the Bears, Flexen will make his second start in the Korean Series.

Looking at his Game 2 performance, Flexen had a solid start as he tossed six innings and picked up a win. Throughout six innings, Flexen gave up one run, unearned, and walked three while striking out three with a 1.50 ERA.