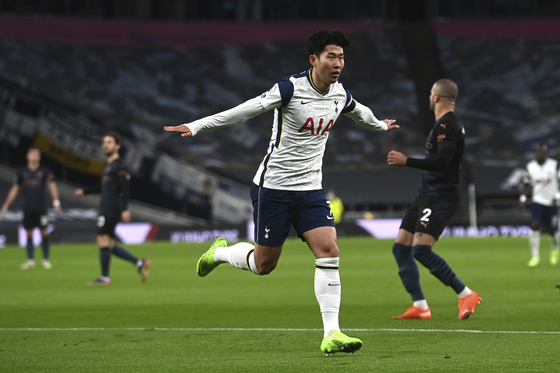 Son was back in Jose Mourinho’s starting lineup for Spurs’ English Premier League (EPL) match against Manchester City at Tottenham Hotspur Stadium on Saturday, despite playing full time for the Korean national football team during its recent friendly match against Qatar on Tuesday last week.

Having safely returned to England on a chartered flight, there were still concerns regarding Son’s health as the Korean national football team had a total of seven players testing positive for Covid-19. Also, as Korea’s head coach Paulo Bento used Son for the full 90 minutes in both of Korea’s friendly matches, there were concerns regarding his physical condition and energy.

But Son quickly washed away all the concerns.

After testing negative for Covid-19 he was allowed to join the starting lineup against Manchester City and just five minutes into the match, Son scored the opener, assisted by Tanguy Ndombele.

Just a few minutes later, in the 13th minute, the Harry Kane and Son duo once again showed their teamwork as Kane scored, assisted by Son. Unfortunately, the goal was ruled offside and the match went back to 1-0.

Following that, two teams struggled to add another until the 65th minute. Mourinho substituted Giovani Lo Celso for Ndombele in the 65th minute, and as soon as Lo Celso got on the pitch, he scored Spurs’ second goal, assisted by Harry Kane.

"Big team, big hears, big solidarity, a proper team, a team that i believe makes Tottenham fans proud," Mourinho was quoted as saying. "Players going to the limits of their energy, sacrifice for the team plan, coping well with let's say a new pressure of 'if you want the match, you go to the top of the league for 24 hours.' There is a big spirit. I know the group is very strong and very united. I'm really, really proud.They deserve big applause and lots of respect."


Mourinho showed his satisfaction with the team as they managed to turn most of their limited scoring opportunity into goals, despite the one offside ruling.

This was Son’s ninth league goal of the season and that number allowed him to become the EPL's top scorer. Son has got off to a flying start this 2020-21 season and was named the EPL’s player of the month in October.

Throughout the month, he scored four goals and picked up two assists.

“Thanks to everyone who voted for me for Premier League Player of the Month,” Son was quoted as saying on the Spurs' website. “It’s a big honor and it means a lot to me. Obviously I would like to thank my teammates as well —we are one team and I can’t win this trophy without them, so it’s ‘thank you so much,’ I will keep working hard and let’s see.”

This is the third time in his career that Son has received the EPL’s Player of the Month award. Prior to this one, Son was named the player of the month for September in 2016 and in April in 2017.

While Son is the scoring leader in the Premier League, Kane got to once again extend his lead in the league’s assists ranking, at eight.

The victory was also a good one for Spurs as it allowed them to surge to the top of the leaderboard in the EPL’s 2020-21 regular season standing. With a win, Spur have picked up six wins, two draws and a loss, totaling 20 points. Spurs are two points ahead of second-ranked Chelsea.

"I'm so pleased," Mourinho was quoted as saying. "After the game, everybody celebrated together and I'm really, really happy with what we're building. I'm really proud of the guys."

Looking at Spurs’ Premier League schedule, their next match will be against Chelsea on Monday, Nov. 30.

Before they face Chelsea, Spurs will play their Europa League Group match against Ludogorets on Friday, Nov. 27.