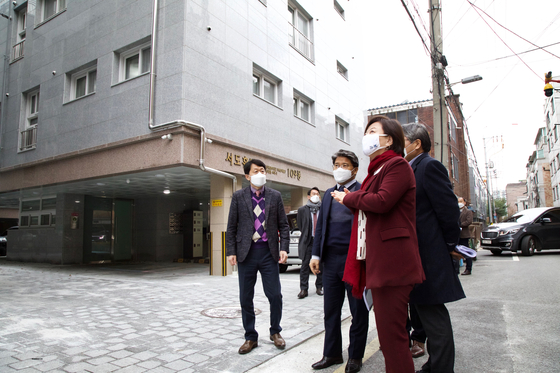 Minister of Land, Infrastructure and Transport Kim Hyun-mee and other lawmakers inspect rental housing during an on-site conference for leased homes in Gangdong District, eastern Seoul, on Friday. [YONHAP]


Recent statements from politicians of the ruling party responsible for the real estate measures have stirred controversy in several online communities for lacking compassion and being out of touch with reality.

“I have gained confidence that if people abandon their fantasies of apartments, then they will be able to create a standard of living from rental housing,” said Rep. Jin Sun-mee of the ruling Democratic Party (DP) on Friday after looking through rental homes in Dongdaemun and Gangdong districts in eastern Seoul. Although the intention was to emphasize the practicality of rental homes, public opinion was not on the side of the lawmaker.

Some members of various online communities pointed out the hypocrisy in Jin’s statement, asking her why she is living in a high-end apartment herself when praising the rental homes. Some posts juxtaposed the rental homes Jin looked at and the apartment she lives in, saying the politician should downgrade.

Jin is currently living in an 84-square-meter (904.2 square feet) unit of Raemian Solvenue, a newly built apartment in Gangdong District.

DP Chairman Rep. Lee Nak-yon’s proposal for a solution to the real estate quagmire — repurposing hotels to create residencies — has also received criticism, although some public figures defended his statement.

“There are people who live at inns for a year or two. This is not a policy that has come out of the blue,” said broadcast personality Kim Ou-joon.

“The proposal is similar to the share house, which is a new form of living,” said DP floor leader Kim Tae-nyeon.

“The word ‘hotel’ is misleading. They’re basically telling us to live at motels,” said a member of the community.

“Rep. Lee Nak-yon owns a 60-pyeong [2,135 square feet] apartment. Is he saying that the citizens should live at inns while he lives in an apartment?”

Some coined the term “hotel beggar,” referring to the prospective tenants who might live at the repurposed hotels, but are from lower-income households.

During a session of the Special Committee on Budget and Accounts on Nov. 10, Land Minister Kim Hyun-mee mentioned the utility of the Didimdol Loan, which was created to help lower-income households with barely any capacity to repay their debt. The loan plan is accessible to buyers of apartments worth less than 500 million won ($449,794).

“There are apartments worth less than 500 million won in the metropolitan region. Apartments in the same price range like my apartment can be bought with the help of the Didimdol Loan,” said Kim.

The apartment unit in Kim’s residence sold for 570 million won and 645 million won in November. The organization representing residents issued a statement publicly criticizing Kim’s ignorance of the market price of her own residence, misleading the public that it is the cheapest residence in the metropolitan region.

Controversial statements were made by politicians amid the real estate quagmire following the legislation of the tenant protection laws in late July.

“This is the growing pain that our economy must go through at one point,” said Land and Transportation Secretary Yoon Sung-won, a Blue House official in charge of the real estate policy.

Regarding Yoon’s statements, critics said the politician’s claims were out of touch with reality, saying they cannot afford the so-called “growing pains” when they are about to get kicked out of their homes. They also brought up the realities of unemployment and economic crises.

Another criticism went: “The protagonist of the real estate tale is President Moon Jae-in, above anyone else.”

A year ago, President Moon made public promises to the citizens regarding real estate. During November’s dialogue session with citizens last November, President Moon said he is “confident that his administration can take charge of the country’s real estate issues,” and that he “definitely will.”

Statistics showed the lack of progress. According to the monthly statistics from KB Kookmin Bank, the average price of apartments during the past year rose by 18.4 percent. Korea Appraisal Board data show that jeonse, or long-term lease, prices of apartments across the country also rose for the 63rd consecutive week.

“President Moon shows up for self-promotion, but runs away when he is supposed to take responsibility. He is a cowardly president,” said Yoo Seung-min, a former conservative lawmaker.

“The president’s statements sting for those who need to painfully give up on their dreams,” said Yoo in a Facebook post. “Unless the administration changes, the real estate nightmare ought to continue.”