The final Kospi and dollar prices against the won is displayed on the screens of a dealing room in Hana Bank, Jung District, central Seoul, on Nov. 20. [YONHAP]


As the dollar drops rapidly on aggressive economic support measures in the United States, speculators are buying up the U.S. currency on hopes of a rebound.

A record $52.8 billion was in foreign currency deposits as of Nov. 19, as the price of the U.S. currency hit a recent low against the Korean won, according to data from KB Kookmin Bank, Hana Bank, Shinhan Bank, Woori Bank and NH Nonghyup Bank, Monday.

Analysts say that the fall of the U.S. currency is in part a consequence of the U.S. Federal Reserve's quantitative easing policy and U.S. government spending in support of the economy during the pandemic, and expectations that aggressive support will continue under a Joe Biden administration. Korea’s relative outperformance in terms of its handling of the Covid-19 outbreak also helps explain the strength of the won.

"Additional fiscal burden on Washington has a high possibility to slow down the speed of economic recovery in the United States which will continue to weaken the dollar against the won. Also, Biden's favorable stance towards world trade will have a positive effect on exports from China, which could further increase the supply of U.S. dollars in the global market."

Dollar deposits attract low interest rates, but buyers are hoping that they will profit from a gain in the currency. 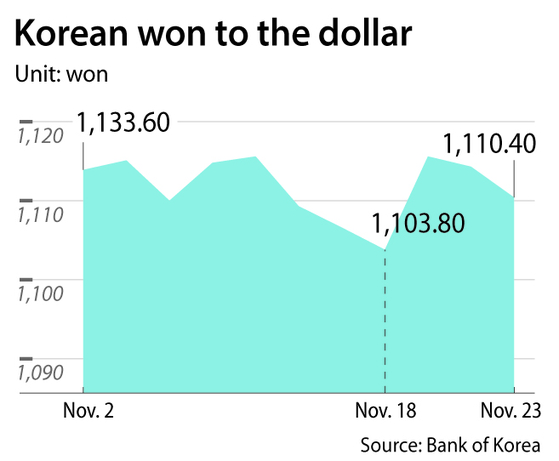 The demand for the dollar comes from many quarters. The so-called ant investors, retail punters looking for a quick gain, appear to be in the market. End users of the U.S. currency may also be buyers. They see this as a way to stock up on money they will need later to pay tuition, mortgages or expenses in the United States.

“We are seeing more people trying to purchase dollars, which is considered a safe asset, to sell them off later when prices increase,” said one official from a commercial bank. “We’ve been receiving more inquiries from people asking how to open dollar deposit accounts.”
The amount of dollars owned by companies also increased.

Dollar deposits by corporate customers totaled $63.67 billion as of October, up 9.9 percent, or $6.29 billion, from September.

This is a result of more companies trying to secure cheap dollars to use later for foreign payables. Exports have been recovering since the second half, but dollar-denominated invoices have also been piling up.

Banks estimate that dollar deposits will continue to increase for the time being.

While the dollar has been weak, expectations are that the currency will rebound once a vaccine is available and being widely distributed, though the third wave of the pandemic and other uncertainties are likely to continue weighing on the dollar for some time.

“There’s a possibility the U.S. dollar could drop below the 1,100 won mark against the Korean won by the end of the year,” said analyst Kim Chan-hee, from Shinhan Investment.

“Exports need to continue the upward trend, and the Covid-19 pandemic needs to show signs of it settling down, for the won to stay strong against the U.S. dollar.”