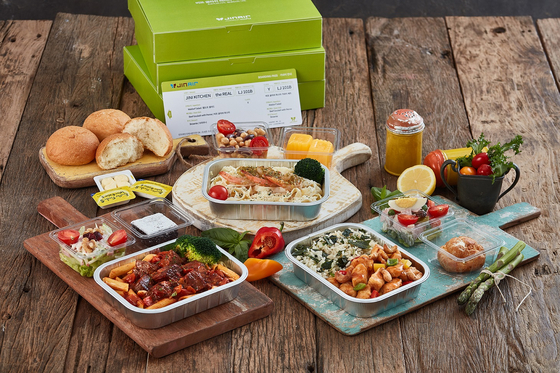 
Airlines continue to roll out unusual services as part of their efforts to overcome the impacts of Covid-19.


Among the latest to step outside the traditional role of the aviation industry are low-cost carriers Jin Air and T’way Air.

Jin Air, 60 percent owned by Hanjin KAL, announced Monday that it is releasing a range of home meal replacement products themed around in-flight meals. It is the first attempt by a domestic airline to sell meals on the ground since airlines started to struggle following the outbreak of the Covid-19 pandemic earlier this year.

In partnership with in-flight service provider innoFly, Jin Air plans to offer three types of meals: beef goulash pasta, cashew chicken chwinamul (aster leaves) rice and cream pasta. The meals will come packaged as they would on a flight, including a bread roll and dessert, according to Jin Air.

They can be microwaved.

The meals will be sold on Jin Air's website starting later this month. The specific date of release and how the meals will be delivered hasn’t yet been decided, according to the budget carrier.

“We’ve decided to launch the products to deliver a sense of delightedness and memories for customers waiting to travel abroad,” said Jin Air in a statement. People “can now enjoy convenient and delicious in-flight meals at home.”

Another budget carrier T’way Air is targeting those looking for a romantic getaway.

In time for the year's end, T’way Air is offering sunset and sunrise flights that start and end at the same airport.

The two- to three-hour flight will fly down the western coast or eastern coast of the country depending on the time of day.