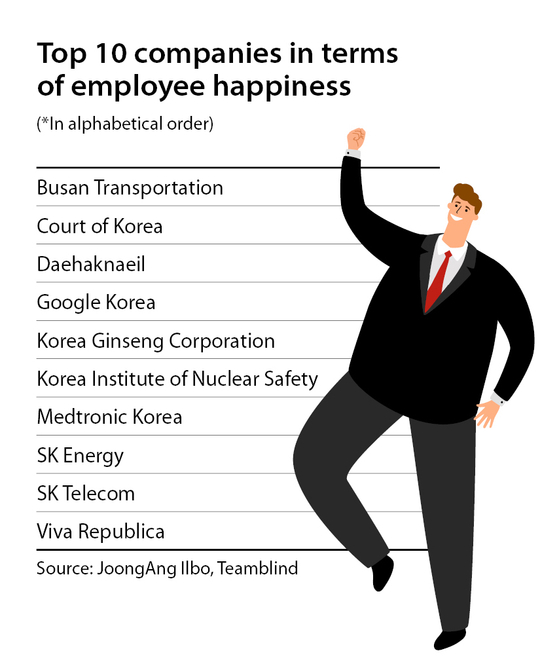 Seven out of 10 Korean office workers suffered burnout over a one-year period, according to a recent report.

This is one of the findings detailed in the report, which was jointly conducted by JoongAng Ilbo and Teamblind. Between July 31 to Oct. 31, the two companies interviewed roughly 72,109 office workers from 9,371 local companies about their work.

The survey covered several categories, including welfare benefits, relationships with colleagues, trust among team members and work autonomy. The survey result was supervised and analyzed by Lee Jeong-hee, a researcher at Korea Labor Institute, and Noh Sung-chul, humanities and social sciences professor at Saitama University in Saitama, Japan.

According to the results, the two most important factors directly linked to the level of job satisfaction were the meaningfulness of work and their relationship with bosses. Worker happiness largely depended on their satisfaction level about their work, not salary and benefits.

“The more Korean workers feel that their work is important, the more likely they are to manage the stress level and get along at the company,” Lee said. The companies “must map out the work and assign it to their employees appropriately so that they can feel that they are actually growing through work.”

Koreans were unhappy about their work when they experience burnout or when they feel like the tasks they are in charge of are less important than those of others. Burnout is a reaction to prolonged or chronic job stress and is characterized by three feelings of reduced professional ability, exhaustion and cynicism.

Of all respondents, seven out of 10 said they suffered burnout over the previous year. More than half of the respondents said they have thought of changing jobs.

Satisfaction level of men and women were on average about the same, but it turns out that women are more likely to suffer burnout easier than men.

“As more than 70 percent of all regular workers are men in Korea’s major companies, women who enter a company through intense competition are likely to feel a sense of belonging,” Noh said. “Paradoxically, that put women into a situation to suffer burnout.”

Of them, Google Korea, Busan Transportation, Viva Republica and SK Telecom were also in the top 10 last year.

The size of the companies was not a major factor in terms of satisfaction. The average happiness index for all respondents who work in large companies and related companies was only about 43.8 out of 100 — less than the overall average at 47.