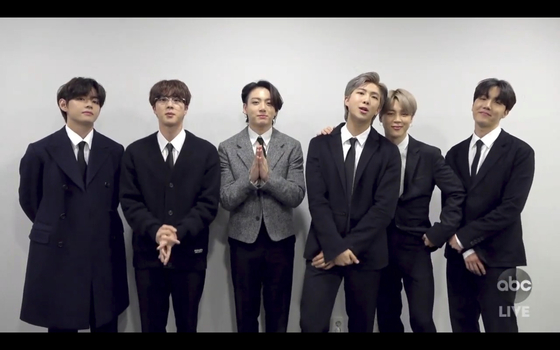 In this screen capture provided by ABC on Sunday, Nov. 22, BTS accepts the award for favorite pop/rock duo or group at the American Music Awards at the Microsoft Theater in Los Angeles. [ABC/AP]


K-pop boy band BTS took home the Pop/Rock Favorite Duo or Group award and the Favorite Social Artist award at the 2020 American Music Awards (AMAs) on Monday, heightening anticipation that the septet could bag a Grammy nomination during a ceremony later this week.

BTS beat pop groups the Jonas Brothers and Maroon 5 for the Pop/Rock award, and boy bands Exo and NCT 127 for the social award.

In a pre-recorded video, the members first thanked the fan club, ARMY.

The band also pre-recorded a performance of its latest song "Life Goes On" for the AMAs marking the first stage performance of the single since the band's new album "BE" was released Friday last week.

"Life Goes On" topped the iTunes Top Song chart in 90 regions across the world immediately after its release.

The performance also includes "Dynamite," the band's English single released in August that garnered BTS its first No. 1 spot on Billboard's Hot 100 singles chart in September.