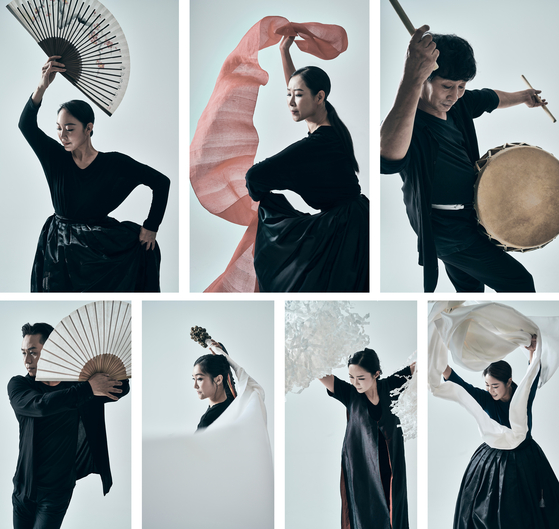 
Over recent decades, attempts have been made to shed light on Korean traditional dances which have been pushed away from the view of the public eye.

In efforts to appeal to audiences that have never seen a traditional Korean dance show before, troupes like the National Dance Company of Korea have been inviting artistic directors from other genres of the arts to create performances that can display the beauty of Korean traditional dance in a more inviting way.

The result of such endeavors has been a success for the state-run dance troupe.

For several years, fashion designer Jung Ku-ho took the helm in producing four works for the National Dance Company of Korea  — "Dan," "Mukhyang," "Hyangyeon" and "Chunhyang" — and all of them received high praise from critics and the public for successfully modernizing traditional content to suit today's audiences.

The performances attracted not only young people to the theater but also foreigners, who said their previous stereotypes of traditional performances were dispelled after seeing the shows.

The National Dance Company of Korea believes it's time to bring the focus back to the actual dance. The performances produced by Jung are based on traditional Korean dance, the hallmark of the company.

However, the company says such large-scale performances involving group dance and orchestras are appreciated more for the overall outcome, like how the stage design goes well with the costumes, the choreography and the music.

To make sure the audience members solely focus on the movements of the body, the National Dance Company of Korea came up with "Hol Chum," which is set to premiere at the National Theater of Korea in central Seoul on Nov. 27.

Seven veteran dancers with at least 30 years of experience in traditional dance will each take the stage to present their own modern interpretations of different Korean traditional dance styles. They'll have nothing on stage but themselves underneath a spotlight.

"We've been making numerous attempts to attract modern theatergoers by intertwining traditional dance with other genres or arts," said Sohn In-young, artistic director of the company. "The results were successful and we've received a lot of praise. But there were concerned voices as well who made criticisms that the essence of Korean traditional dance was being lost."

"The performance will be held at the Byeoloreum Theater, which is suitable for smaller performances like 'Hol Chum' as it is designed to draw focus onto the stage more easily than other larger theaters," said Sohn. "It will be possible for the audience to observe and feel the dancers' detailed movements, solely focusing on the dancers and the dance movements and appreciating them and them only."

Seven dancers will take part, including Kim Won-gyoung, who will be performing "Geumhyangmu" to depict a sense of longing for one's parents along with the lonely melodic lines of the geomungo (six-stringed Korean zither).

Yoon Seong-cheol will present "Sansan, Susu" by dancing the traditional dance of hallyangmu (dance of the prodigal man). According to the company, Yoon will be introducing a new style of hallyangmu by adding ever-changing aspects of nature to the original style.

Park Jae-soon, known for percussion dances, will be performing "Bodeum-go" to console the public with percussion sounds and dance. He'll be combining the Buddhist dances and the Jindo percussion dance. Next on stage will be Park Young-ae, who will present "Salm (Life)-puri." It describes deep reflections on life, depicting the joys and hardships by combining the sorrow of the salpuri (soul-purifying) dance.

Cho Soo-jung's "Sansumukjuk," which has transcended the aesthetic achievements and the inner thoughts of Joseon scholar, painter and poet Sin Saimdang (1504-51), expresses poetry and paintings with fans, along with detailed but royal choreography, rather than with an artistic work of brushes.

Lee So-jung's "Puneori," based on the salpuri dance and mudang (Korean traditional shaman) dance has reinterpreted the process of banishing evil through an exorcism by connecting a long piece of fabric and a bell on a stick to create round and curvy choreography.

Jung Hyun-sook, who is known for her excellent sense of expressing emotions through choreography, will perform "Simhyangjijeonmu," which maximizes the fierceness and holiness of the traditional Korean dance based on shamanism and creates a new type of ritual dance that transcends sorrow.

"We hope to develop new and authentic traditional dances while incorporating modern aesthetics and themes so that our valuable tradition can continue to be enjoyed and appreciated," said Sohn.