Family members of people with developmental disabilities hold a rally near the Blue House on June 10, 2020, to demand better welfare services from the government, following a pair of apparent suicide-homicides by parents of children with disabilities since the outbreak of the coronavirus. [YONHAP]


Motherhood has never been easy for Kim Jin-hui, whose eight-year-old son has autism. But since the arrival of the coronavirus in Korea, the stay-at-home mom describes her life as a living hell.

“After the pandemic started, my son and I mostly stayed home not because we wanted to, but because we had no choice,” said Kim, 40, who lives in western Seoul. “Just like many kids with autism, my son is obsessed with his daily routine, such as going to therapy sessions in the afternoon and visiting a convenience store at a nearby park before dinner. But everything that kept him calm and stable just stopped overnight, and he is not accepting it.”

Kim said it didn't take long for his condition to deteriorate once their daily routine was disturbed.

“It took months of vigorous efforts to complete his toilet training two years ago, but it took less than a week for him to regress,” she said. “He refuses to wear a face mask, so we have to struggle for hours when we need to go outside. He became extremely sensitive and aggressive. Sometimes, he bangs his head on the wall.”

Following the pandemic, local welfare centers, operated by regional autonomous governments, have shut down their operations under social distancing guidelines. Parents of children with disabilities who used their professional daycare and therapy services were suddenly left with the full burden of caring for them at home — 24 hours a day, seven days a week.

“People talk about a 'new normal,' but this is not normal,” Kim said. “We will never get used to this.”

While Kim was struggling with her son at home, others made tragic choices under the strain of their already difficult lives worsened by the pandemic. In June, a 59-year-old mother and her 24-year-old son with mental disabilities were found dead inside a car, parked on a road in Gwangju. The local police said they found a suicide note inside the car. 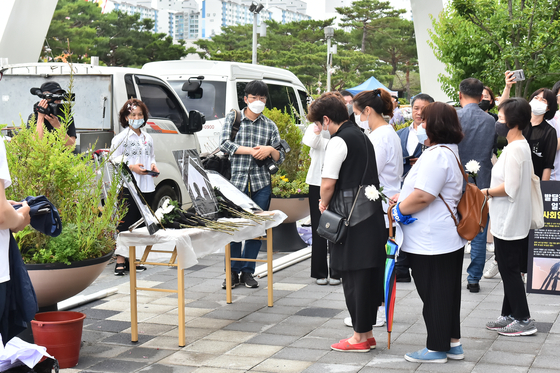 Residents lay flowers in a memorial set up outside the City Hall of the Gwangju Metropolitan Government to express condolences to the mother and son who committed suicide. [YONHAP]


According to the police, the mother had divorced and was living with her son. She had previously relied on a local welfare center’s daycare program for her son on weekdays, but all welfare centers in Gwangju had shut down in February due to Covid-19.

The woman temporarily admitted her son to a mental hospital but withdrew him after he visibly struggled with the change and stopped eating. Over the past months, she had been caring for him at home without any outside help, the police said.

It was the second apparent suicide-homicide of a mother who had a child with developmental disabilities since the pandemic. In March, a 49-year-old mother and her teenager son were also found dead inside a car in Seogwipo City in Jeju. After her son’s school for students with disabilities delayed its new semester and all welfare centers for those with disabilities were shut down, she was also forced to look after her son at home.

The Korean Parents’ Network for People with Disabilities has urged the government to help the children and their families cope with the crisis.

“All state-run services have been shut down,” the organization said in a statement. “The government said the families could use help services at home, but it was already hard to find such caregivers. Therefore, the families have been taking on all the responsibilities without any help.”

“The government has caused this by neglecting them amid the Covid-19 pandemic,” it said, urging the administration to come up with effective measures. 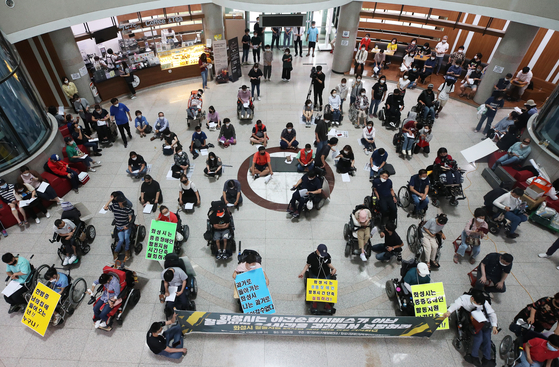 An alliance of 34 groups representing people with disabilities hold a press conference at the lobby of Hwaseong City Hall in Gyeonggi on July 10, 2020, and demand that the local government improve its welfare services to improve their daily activities. [YONHAP]


It remains to be seen if their demands will be answered. On Oct. 28, President Moon Jae-in submitted the 556 trillion won ($503 billion) budget plan for next year to the National Assembly, but the money earmarked to support people with disabilities showed that the government seems to have no particular programs to support children with developmental disorders.

Next year, the Ministry of Health and Welfare’s budget is earmarked for 90.15 trillion won, 9.2 percent higher than this year's, and accounting for about 16.2 percent of the total budget plan. Most of the additional budget, however, is earmarked for projects to develop a vaccine and cures for Covid-19.

The budget to assist families of people with developmental disabilities is set for 2.9 billion won in next year’s plan, unchanged from this year’s budget.

The administration has passed four supplementary budget bills this year alone to support people affected by the pandemic, including self-employed workers and small-business operators, but no money was spent on measures to help people with disabilities.

In its third supplementary budget bill, the government cut 10 billion won originally earmarked for after-school activities for students with disabilities.

Asked by lawmakers about the lack of funding for that population, Health and Welfare Minister Park Neung-hoo said during a National Assembly session in September that "it is actually discrimination against people with disabilities to include them in the vulnerable populations."

Pressed further about budget items to benefit people with disabilities, Park responded, "There is no budget earmarked for miners or farmers."

“People with disabilities cannot understand why their welfare centers are shut down,” said Lee Jeong-geun, vice chairman of the Korean Parents’ Network for People with Disabilities. “We are seeing more suicides of disabled people, but they are rarely reported. The government held discussion sessions and conducted studies with an aim to create a community care program, but nothing has changed. As Covid-19 continues, we are ignored more and more.”

Activists, experts and lawmakers said group care for disabled people cannot be the answer in the midst of a pandemic, and suggested that Moon needs to fulfill his campaign promise to increase access to one-on-one care for individuals. 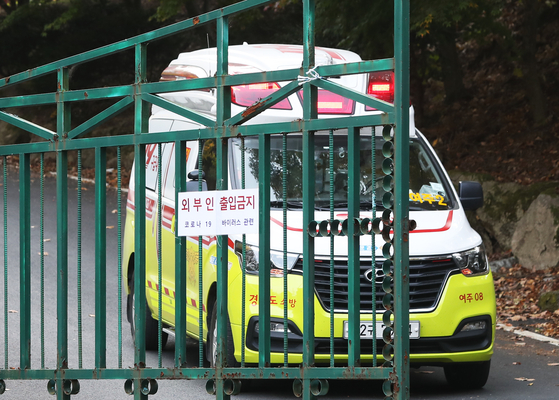 An ambulance leaves St. Raphael's Home, a group home for people with disabilities, in Yeoju, Gyeonggi, on Oct. 25, 2020. The facility was hit by cluster infections of Covid-19, and the Yeoju city government said 41 were infected from the facility as of Nov. 1, 2020. [YONHAP]


“People with disabilities are especially vulnerable in a crisis,” said Justice Party Rep. Jang Hye-yeong. “Those living in group homes particularly suffered from cluster infections in the past months. It is embarrassing to talk about the success of Korea’s infection control and prevention despite those cases.”

Professor Park Hyeon-ok of Baekseok University agrees that the government must create a sophisticated policy in order to assist people with disabilities, particularly children and their parents, to safely restore their daily lives, rather than keeping them at home to prevent infections for the time being.

“The government has to think about a more effective way to use the budget,” she said. “It will be desirable to create communication and a consultative body involving all concerned parties to come up with the best plan in the longer term.”

Park also said inter-ministerial cooperation, particularly between the Health and Welfare Ministry and the Education Ministry, is crucial in order to increase the effectiveness of the government welfare services for children with disabilities since the budget is tight.

[Journalism Internship] Dramas raise awareness about people with disabilities, but the struggle is far from over

Taking disabled out of institutions sees a backlash