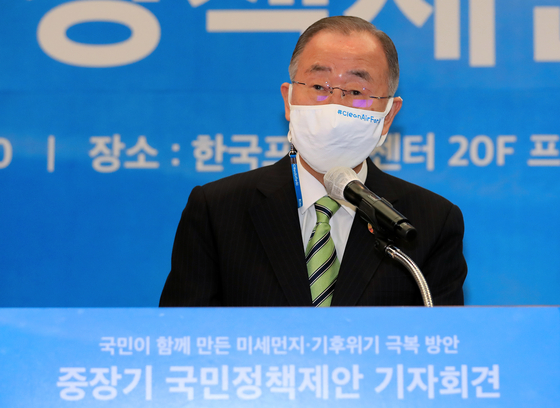 Ban Ki-moon, the chair of the National Council on Climate and Air Quality (NCCA) and former UN secretary general, speaks at a press conference at the Korea Press Center in central Seoul Monday on public policy proposals to combat fine dust and climate change. [NEWS1]


The National Council on Climate and Air Quality (NCCA) urged Korea to ban domestic sales of diesel vehicles from as early as 2035 and to enable coal-free power generation by 2045 as a part of long-term public policy proposals on managing fine dust and carbon emissions Monday.

“The era of conflict between the environment and the economy is over,” said former UN Secretary General Ban Ki-moon, chair of the council, in a press conference in central Seoul. “Our response to the climate crisis is our economic policy, and we need to throw away our previous development paradigm.”


The NCCA, a presidential committee launched in April 2019, held a press conference at the Korea Press Center announcing its mid- to long-term policy proposals on combatting fine dust and climate change after consulting some 500 members of the public for the past year. The council had exchanges with people from all walks of life over 100 times, including through forums and debates.

The policy proposals addressed three overarching areas — sustainable development, reaching carbon-neutrality by 2050 and the transition to a green economy and society — and is comprised of action plans for 29 tasks, divided into eight key tasks and 21 general tasks to strengthen existing government policies.

To reduce greenhouse gas emissions, the council proposed to set a road map for a transition from diesel cars to environmentally friendly vehicles and called for only sales of zero emission vehicles (ZEVs) or hybrid vehicles by 2035 or 2040.

The council also proposed to match the price level of gasoline and diesel through tax adjustments in order to reduce demand for diesel vehicles. It called to establish renewable energy sources and to reflect environmental costs in electricity bills.

The council also acknowledged that air quality management is a shared problem in the region and proposed a joint Northeast Asian response to manage fine dust through diplomatic means including agreements or treaties.

It also proposed a national think tank for more comprehensive and coordinated scientific research and policy recommendations on fine dust and climate change.


Last year, the Korean government adopted the seasonal fine dust management system from December to March, proposed by the council, seen to have contributed to reducing the fine dust levels by some 27 percent in the winter months.

Ban said, “Despite there being areas that could bring about some discomfort to the people, I am grateful to the people who are participating to overcome the fine dust problem and climate crisis and believe this proposal can bring about policy that can change our daily lives.”