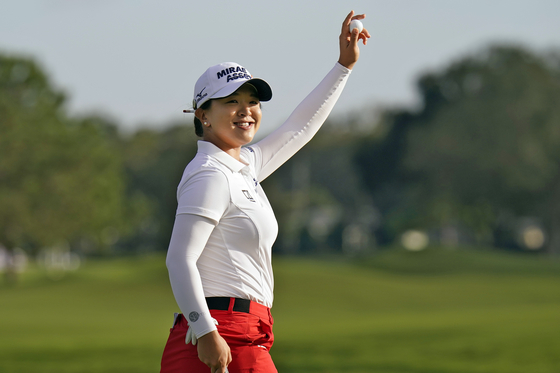 
Just a little over a month after her major title, Kim Sei-young picked up her second win of the season on the LPGA Tour on Sunday.

Kim headed into the final round five shots ahead of McDonald and got off to a strong start by making a birdie on the par-4 first. Although she made a bogey right after it, on the par-4 second, she still managed to maintain her big five-shot lead.

Once Kim finished her round, she was quickly covered in champagne as her friends ran onto the golf course to celebrate her victory.

“My friends put it on my head and then my T-shirt and everything,” Kim was quoted as saying on the LPGA website. “Feel like take a shower in the champagne. I still smell. And then drink a little bit and feel — feels, you know, like little drunk.”

With a win, Kim took home the prize money of $225,000, good enough for her to top the season-long official money standing. Not only that, Kim also became the leader in the Rolex Player of the Year standing. In both categories, Kim pushed down former world No. 1 Park In-bee to get to the top.

Despite the LPGA Tour’s postponement of the season due to the coronavirus, this is already Kim's second win. Even more impressively, she picked up her first-ever major, the KPMG Women’s PGA Championship, just a little over a month ago on Oct. 11.

Right after that major, Kim headed back to Korea briefly, going through two weeks of self quarantine, and then returned to the United States for the Pelican Championship, making this her second straight win in LPGA tournaments that she has competed in.

“Always after win, I always got the extra confidence,” Kim was quoted as saying. “So when I play, standing on the golf course, it feels very happy when I walk on. It’s really great.”

Due to the pandemic, not just Kim, but all the golfers struggled with their schedule as the LPGA Tour kept on getting postponed with some of the tournaments canceled. During this time, Kim was one of the Korean golfers to play on the KLPGA Tour, but she wasn’t seeing much luck in Korea in terms of wins.

Once she returned to the United States, Kim reached her peak. Back in her rookie season in 2015, Kim quickly rose to stardom by picking up three wins, good enough for her to win the LPGA Tour’s Rookie of the Year. She continued to go from strength to strength with wins every single year since on the LPGA Tour.

In the 2019 season, she once again picked up three wins which included the season-finale, the CME Group Tour Championship. Although this wasn't a major, the victory in the season finale made headlines as she was the winner of the $1.5 million jackpot tournament.

While Kim already had an impressive career on the LPGA Tour, with 10 victories until 2019, she was missing one thing: A major title.

She didn’t have to wait long.

Once she headed back to the United States to re-start her LPGA Tour schedule back in August, Kim quickly picked up a major title in October, at the KPMG Women’s Championship. She won it in style, as she finished the tournament five shots ahead of Park. That victory also allowed Kim to become the world No. 2.

And with her second win of the season on Sunday, Kim has now won a career 12 tournaments on the LPGA Tour.

Having already achieved so much in her six years on the LPGA Tour, Kim has now set a higher goal, to become No. 1. Despite her win on Sunday, Kim’s world ranking is expected to stay at No. 2.

The LPGA Tour now has three tournaments remaining in the 2020 season and Kim may have her shot at achieving her goal as one of the tournaments is a major: The U.S. Women’s Open.

“I [was] able to be more relaxed even [in] major tournaments, in the KPMG,” Kim was quoted as saying. “So I think that major win [will] help me at the U.S. Women’s Open.”

Before the U.S. Women’s Open, the LPGA Tour will continue its season at the Volunteers of America Classic at Old American Golf Club at The Colony, Texas, from Dec. 3 to 6.

The players will then stay in Texas, but move to Houston for the U.S. Women’s Open Conducted by the USGA at Champions Golf Course, from Dec. 10 to 13.

Following the major, the long-awaited 2020 season will finally end with the CME Group Tour Championship at Tiburon Golf Club in Naples, Florida, from Dec. 17 to 20. Kim is the defending champion at the tournament.