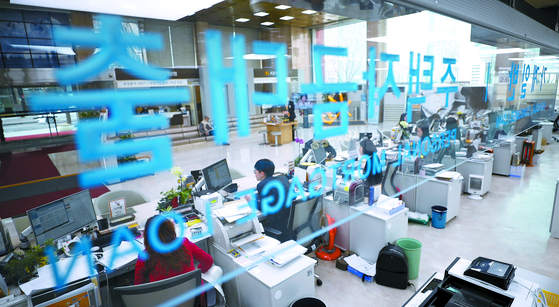 Customers consult with staff about loans at a bank in Seoul. [YONHAP]


Household debt reached a record 1,682.1 trillion won ($1.51 trillion) in the third quarter despite the government's attempts to cool off the real estate market and borrowing to buy property.

According to statistics released by the Bank of Korea Tuesday, the increase of 44.9 trillion won, or 7 percent, over the same period a year earlier was the largest since the fourth quarter of 2016, when the previous government aggressively eased real estate regulations to boost the property market.

In contrast, 24 sets of real estate measures have been announced since President Moon Jae-in took office in 2017 to chill the real estate market, but they have had the opposite effect.

By loan types, 17.4 trillion won of fresh loans were borrowed to purchase property and jeonse, or lump-sum rent deposits, during the three month period, an 83.2 percent increase on year.

“Property purchases and jeonse deposits increased compared to the previous quarter,” said Song Jae-chang, an official from the central bank. “Demand for stock purchases, as well as loans for livelihood expenses, also increased due to the pandemic.”

The number of property and jeonse transactions increased from the previous quarter by 4.4 percent and 2.9 percent, respectively, according to the Bank of Korea.

A total of 22.1 trillion won of fresh unsecured loans were borrowed, up 466.7 percent from the previous year. This is the first time this year they surpassed loans borrowed for property purchases.

Additionally, 5.4 trillion won of new loans were made on credit cards, bringing the outstanding total to 96.6 trillion won, up 125 percent on year. Purchases on credit cards increased especially through online channels as consumer sentiment starting picking up in the second half.

“Credit card loans increased in September following a surge in online purchases from the contact-less trend of Covid-19 and deferred payments made during the Chuseok holidays,” the Bank of Korea explained.

The government recently announced restrictions on people borrowing more than 100 million won in unsecured loans. Commercial banks decided to apply a 40 percent debt service ratio (DSR) starting Tuesday for those who earn more than 80 million won a year to stop people from using such loans to purchase property. This means the yearly payments on a loan can not exceed 40 percent of the borrower's salary.

“At this point, we don’t know what effect the loan restriction will have on the fourth quarter, but we need to be cautious of the rate of increase in household debt,” said Song.