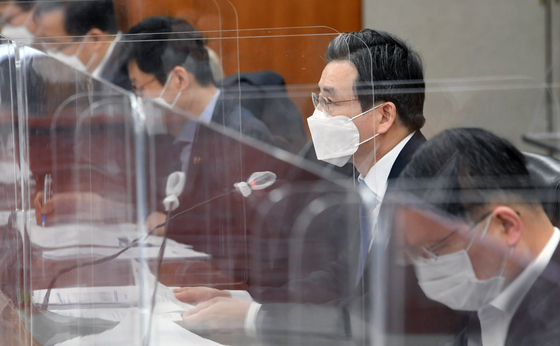 Kim Yong-beom, Vice Finance Minister, warning against possible insovlency on debt as the Covid-19 situation faces a resurgence during a government meeting held in Yeouido, Seoul, on Tuesday. [YONHAP]


With hopes for a vaccine giving the stock market a shot in the arm, a top government official offered a reality check, saying that benefits of the good news on the Covid front could take time to affect the real economy.

Vice Finance Minister Kim Yong-beom said that all indicators, including loans overdue, were still flashing green, but he raised concerns about the financial risks created by the pandemic crisis during a government meeting held Tuesday.

“Investment sentiment on risky assets seems to be recovering as there are growing hopes over Covid-19 vaccine since the U.S. presidential elections as well as significant upswings of stock markets in major countries,” Kim said.

“[However], major institutions including the U.S. Federal Reserve and the European Central Bank are warning of a possible delay of an economic recovery in the fourth quarter due to the resurgence of Covid-19.”

For nearly a week, the daily confirmed cases have been around 200 to 300 in Korea. The government implemented Level 2 social distancing regulations on Tuesday.

As was the case with earlier social distancing measures, service industries have been hit especially hard, the revenue of alleyway businesses falling by about half.

According to Bank of Korea’s report on Tuesday, household debt peaked to an all-time record of 1,682.1 trillion won ($ 1.51 trillion) in the third quarter.

While money borrowed for buying real estate and investing in stocks was the main contributor, some of the funds were used for helping people make ends meet and their collapsed businesses.

“With Covid-19 remaining, the soundness of financial companies could drop due to those borrowing money failing to pay their debts,” Vice Finance Minister Kim said.

Kim noted that so far payments were being made.

“As of end of September, overdue payments on loan at local commercial banks were at 0.3 percent, the lowest since 2007,” Kim said. He said while the savings banks' overdue payment rate increased by 0.1 percentage points to 3.8 percent when compared to the end of last year, it was still a relatively sound situation.

Money savings bank loans are considered the highest risk, as these loans are usually taken out by people with relatively low credit ratings that limit their access to commercial bank loans.

“Despite stability in the financial market, there is a need to closely monitor the soundness of financial companies,” Vice Minister Kim said.

“As such [insolvency] possibilities cannot be ruled out, we will try to direct financial companies to voluntarily enhance their capacity to absorb the losses as pre-emptive risk management,” Kim said.