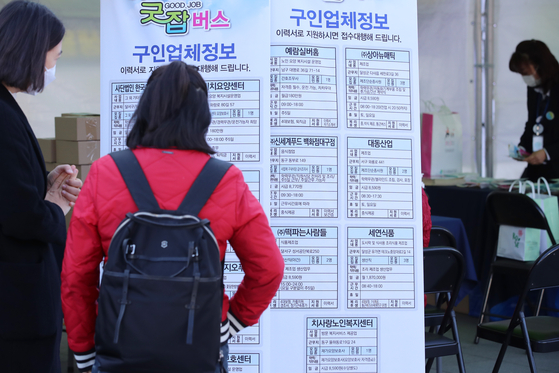 A woman looking at a board listing companies offering jobs during a job fair exclusive targeting at women, who had to stop their careers due to marriage, childbirth or raising a family, held at Daegu on Nov. 9. [NEWS1]


The number of women whose careers were interrupted due to marriage, pregnancy or raising children has shrunk compared to a year ago.

According to the latest study by Statistics Korea, the number of women whose careers have been cut short as of April this year amounted to 1.5 million people. The study includes all women aged between 15 and 54 that have previously had a job but are not currently working.

Those women whose careers have been cut short now account for 17.6 percent of all women in that age group. That’s a 1.6 percentage-point drop from last year.

The statistics agency said one of the reasons that the figure has declined is because of the drop in the number of people getting married.

Another major contributing factor, according to the statistics agency, is that less women are having children.

In fact, raising children topped the list when it came to reasons why women quit their jobs, at 42.5 percent. Marriage came in second with 27.5 percent while pregnancy and childbirth accounted for 21.3 percent.

“The number of women whose careers have been halted has fallen as women are avoiding marriage or giving birth,” said Chung Dong-wook, head of the statistics agency’s employment stats. “Additionally, there are increasing numbers of women who are continuing their careers thanks to government policies such as encouraging child care leave.”

More concerning this year is the increase in the number of women who are giving up searching for jobs after halting their careers due to marriage or childbirth.

According to Statistics Korea, among the women whose careers have stopped, 12,000 have entirely given up on rejoining the workforce. That’s 2,000 more than a year ago, or a 16.3 percent increase.

They now account for 0.8 percent of women that have left the workforce, a 0.2 percentage point increase compared to the same period a year ago.

The biggest reasons for giving up entirely is the lack of opportunity.

Among those that have stopped searching, 52.1 percent, or 6,000, said they couldn’t find a job. The second biggest reason was because of a lack of education and skills, at 25.6 percent.

The third biggest reason was because wages and working conditions did not meet their expectations, at 22.3 percent.

A separate study by Statistics Korea in September showed that a bigger percentage of women worked in the service industry compared to men.

While the biggest group of women worked in professional jobs such as lawyers and doctors, accounting for 23.3 percent of all women that were working in 2019, those working in the service industry, including cashiers and restaurant workers, accounted for 17.8 percent.

That’s considerably higher than the 6.8 percent of men working in the same industry.

Job opportunities, especially in the service industry, have been hit the heaviest since the first confirmed case of coronavirus was announced in late January.

With stricter social distancing implemented since Tuesday, job opportunities in the service industries are likely to face another hit, reducing the opportunities for many women that are looking for jobs after years of child care.