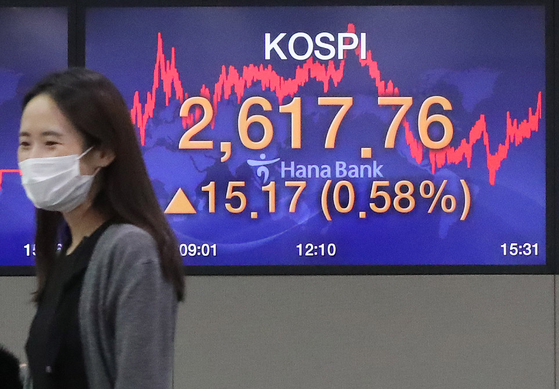 A screen shows the final figure for the Kospi in a dealing room in Hana Bank in Jung Distrct, central Seoul, on Tuesday. [YONHAP]

Stocks extended their winning streak to a fifth day, finishing at an all-time high Tuesday on hopes of an economic recovery and new coronavirus vaccine development. The won fell against the dollar.

Investor sentiment ran high in the global financial markets, as progress in Covid-19 vaccine development fueled optimism that the economy and trade would normalize down the road.

Foreigners extended their buying spree for a 14th straight session, the longest since the 19-session streak that ended in August 2016.

The local currency closed at 1,112.7 won against the dollar, up 2.3 won from the previous session's close.