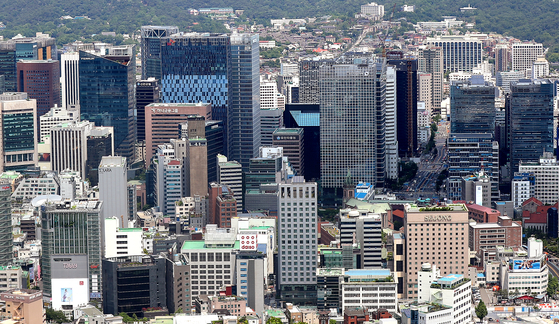 A view from Mount Namsan, central Seoul, of the headquarters of major Korean corporations in May. The leading corporations have been lowering total employee numbers. [YONHAP]


Head counts at almost 60 percent of Korea’s largest companies have declined this year so far despite corporate Korea reporting strong earnings in the recent quarter.

According to a JoongAng Ilbo analysis of third-quarter reports of the core companies of the 15 largest chaebol, eight out of 14, or 57 percent, downsized. Hanwha Solutions, which was formed by the merger of Hanwha Chemical and Hanwha Q Cells & Advanced Materials merged, was in the top 15 list but was excluded from the employee size analysis.

This year’s third quarter was a relatively good quarter for corporations. The Korea Exchange’s analysis of the third-quarter results of 590 publicly listed companies showed that the aggregate operating income was 36.4 trillion won ($32.8 billion), 27.5 percent higher year-on-year.

The JoongAng Ilbo’s analysis supported the trend. Among the 15 companies surveyed, only six including SK Innovation suffered year-on-year losses in operating income.

The recovery trend has not fully translated to a positive trend in employment, but Samsung Electronics was able to hire more people — the number of employees during the third quarter rose 3,231 people, or 3.05 percent on year, to 108,998 people.


Hyundai Motor’s head count rose by 949 people, or 13.6 percent; at SK Innovation, it was up by 357 people, or 17.52 percent; and Posco gained 451 people, or 2.59 percent. The three companies all faced year-on-year decreases in operating income, but they hired more people. Korea Shipbuilding & Offshore Engineering (KSOE) and LS Cable & System also hired more people, but not many.

SK Innovation’s stance on hiring is notable. The company suffered an operating loss of 2.24 trillion won through the third quarter due to the weakened demand for oil and lower refining margins. However, the subsidiary has been continually hiring new people to strengthen its competitive edge in automotive batteries. Last October, SK Innovation hired Joo Jae-man as the head of battery system development — he was director of the automobile business team at Seojin System, a manufacturer of aluminum alloy. Currently, the company is hiring next-generation battery developers on a rolling basis. Without a limit on numbers, the company’s policy is to hire all qualified applicants.


Not all companies can afford to implement the same hiring policy as SK Innovation. Most companies reduce numbers in the face of economic hardship. Companies with the most drastic decline in head count during the third quarter include Lotte Shopping, Emart, KT, Korean Air Lines and Doosan. GS Caltex, which took a hit due to the recession in the refining industry, lowered numbers by 64, or 1.93 percent of the total.

Lotte Shopping and Emart have been closing their less profitable stores, and Korean Air Lines has been implementing unpaid leave on a rotating basis. KT has been continuously reducing staff numbers at retail locations by accepting applications for voluntary resignation.
“Not only offline retail businesses, but also airlines and communication businesses whose sales have been in stagnation, will continue to downsize,” said a person in the finance industry.

“As the coronavirus pandemic prolongs, it is unknown how much longer the major companies, which have been the ‘stronghold of employment,’ will maintain its role in hiring,” said Jung Tae-kyung, a retired data management professor who worked at Cha University. “We need to prepare for an employment shock, as the implementation of artificial intelligence or smart factories and automation in the ‘untact’ era will likely reduce the recruitment size of corporations.”