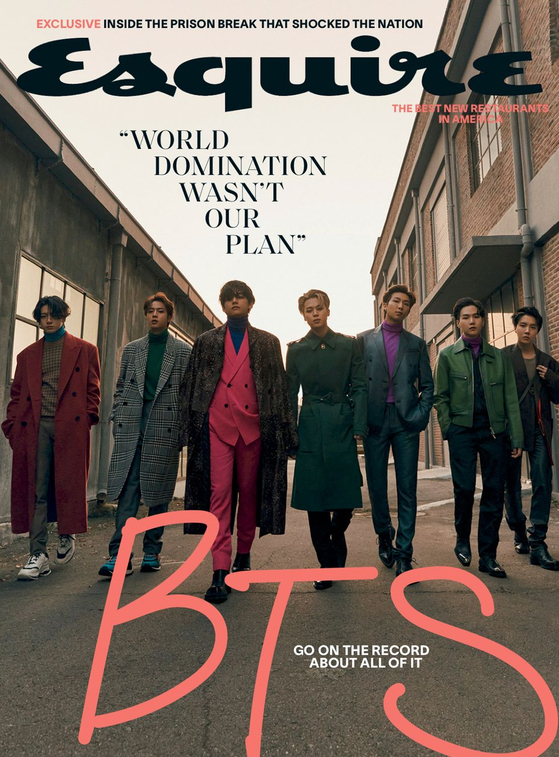 
BTS says winning a Grammy is the band's ultimate goal on its American journey in a recent interview with fashion magazine, Esquire.

The U.S. fashion magazine's Winter 2020 issue, released Tuesday, features BTS on its cover and an interview with the septet conducted in October.

The members expressed their anticipation ahead of the upcoming Grammy Awards in the cover story interview conducted by the magazine's editor-at-large Dave Holmes.

“We would like to be nominated and possibly get an award,” RM said.

The nominations for Grammy Awards, which is slated to take place on Jan. 31, 2021, will be announced early on Nov. 25.

The Esquire piece also describes BTS as “the biggest band in the world," which has "ascended to the peak of pop, redefined fame, and challenged traditional masculinity."

Actor and comedian Jimmy Fallon, host of NBC's popular talk show "Jimmy Fallon Show," also praised BTS in an interview with Esquire, saying that the band has the power to transcend language.

Having topped Billboard's Hot 100 singles chart with its hit song "Dynamite," BTS is only missing a Grammy from the three major music awards held annually in the United States.

At the 2020 American Music Awards (AMAs) on Monday, the band won the Pop/Rock Favorite Duo or Group award and the Favorite Social Artist award, heightening anticipation that the septet could bag a Grammy nomination on Wednesday.