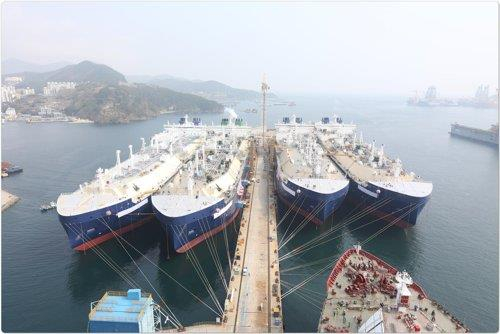 A French company has been fined for using its monopoly position to squeeze customers to buy additional services.

It is the second time the FTC levied fines against a company for using market dominance to compel clients to purchase additional services. The first was Microsoft in 2006.

The FTC said the French company has forced eight Korean shipbuilders including the top three — Daewoo Shipbuilding and Marine Engineering (DSME), Hyundai Heavy Industries and Samsung Heavy Industries — to purchase its engineering service as a package with its licensed technology for liquefied natural gas (LNG) storage.

The FTC said GTT holds the No. 1 spot globally in terms of technologies related to cargo containment systems for LNG carriers, with a 95 percent market share, adding that recently constructed LNG carriers have all use GTT technologies.

The containment system liquefies natural gas by pressurizing and freezing it at minus 163 degrees Celsius (minus 261 degrees Fahrenheit). This reduces the volume by 600-fold, making it more easy to store and deliver.

The GTT technologies prevent external heat from affecting gas in the storage tanks and make the tanks stronger.

Despite Korea leading in the global market LNG carrier manufacturing, the shipbuilders have been heavily dependent on GTT’s “membrane” containment system.

The FTC said Korean shipbuilders have developed their own LNG containment technologies and are trying to expand their engineering services.

GTT rejected the separate purchase of additional engineering services related to the membrane containment system. Its contract included a condition in which the French company could cancel the contract with the local shipbuilders if the shipbuilders initiated a patent dispute.

The FTC stated that in a press release that the limiting of engineering services limited competition, making the contract with GTT unfair.

“We expect the recent fine will improve competition that will lead to better price and quality by creating a condition in which new developers will be able to enter the LNG carrier containment system and engineering services market,” said a FTC official.

In June, the three major Korean shipbuilders inked a $19-billion agreement with state-owned Qatar Petroleum to build 100 LNG carriers by 2027.

The Moon Jae-in government has been pushing LNG carrier manufacturing as part of its green business agenda.

Korean shipbuilders rank No. 2 for second straight year in 2022