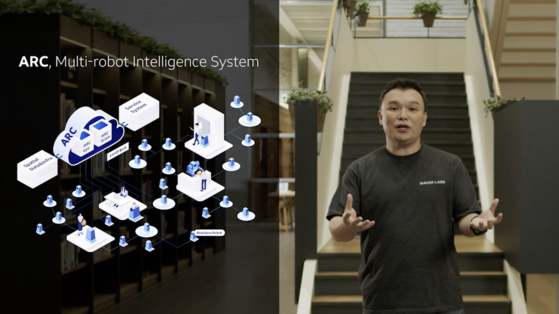 Naver Labs CEO Seok Sang-ok introduces the concept of ARC, a multi-robot intelligence system, that would work as the central brain for multiple robots at Naver's second office in Bundang, Gyeonggi. [NAVER]

Naver’s new office building in Bundang, Gyeonggi, will include a fleet of self-driving robots that can exchange data with each other and upgrade themselves using a central cloud system.

At Naver’s annual developers’ conference Deview 2020 held online Wednesday, the IT company introduced ARC. Short for AI, robot and cloud, ARC is a multi-robot intelligence system, as Naver puts it, which acts like a shared brain for robots that work alongside human employees in the building, performing tasks like transporting items around the office.


“The commercialization of robots would mean that humans live with not one or two, but a lot of robots,” said Seok Sang-ok, CEO of Naver Labs. Naver Labs is a research and development unit that specializes in robotics and autonomic driving.

“To reach that point, sticking with the old way where the focus lies on upgrading the sensors or the central processing unit [CPU] of individual robots will not be enough. Every robot will have to get smarter at the same time, and that’s what this multi-robot intelligence system can do.”


The system would be placed on Naver’s cloud to reach each robot via 5G. That would not only allow for a simultaneous update but also reduce production costs and battery consumption for individual robots.

In terms of the robots’ movements, ARC will act as their eyes and brain. The ARC Eye can pinpoint where the robot is, not based on GPS, but on localization technology which uses the images captured on the robots’ camera to recognize which part of the building it is in. With that information, ARC Brain will decide the best route to reach a destination.


The hidden technology behind that feature is Naver Labs’ 3-D mapping technology that allows the system to precisely map areas using images captured via camera.


Naver’s second office building will be the first test bed for ARC and its brainless robots. Currently under construction in Bundang, Gyeonggi, Naver aims to make it the world’s first “robot-friendly building.”


On Wednesday, Naver also introduced the beta version of Whale ON, a video conferencing service that would be offered on the company’s internet browser, Whale. Users of Whale’s PC and mobile app will be able to use the service, without downloading additional programs. An official launch is planned to happen this year.


This year’s Deview 2020 will be held online for three days through Friday. A total of 81 sessions are prepared — the largest ever for the annual event — where speakers will discuss the latest IT trends in cloud, machine learning, AI, vision, robotics and autonomous driving.