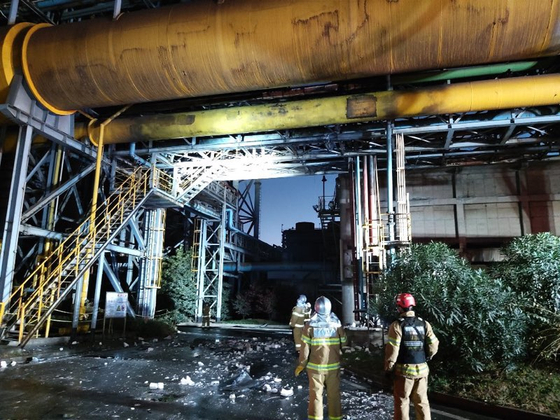 Posco’s Gwangyang steel mill, where three people were killed in an explosion on Tuesday. [YONHAP]


Posco apologized Wednesday a day after after three people were killed in an explosion at a plant in Gwangyang, South Jeolla.


The apology came a day after the three workers were killed in the explosion at around 4 p.m. on Tuesday. The explosion appears to have started near a furnace where workers were handling high-pressure gas, according to authorities.

The exact cause of the incident has not been identified.

One of the victims was a 40-year-old Posco employee, and the two others, aged 32 and 53, worked for a contractor.

“We pray for the souls of the departed [who died] from this abrupt accident that occurred at a steel mill in Gwangyang,” said Posco CEO Choi Jeong-woo, who recently expressed his hope to run for a second term, in a statement. “We deeply apologize and send condolences to the bereaved.”

Choi also apologized to society for causing concerns and said the company is “doing our best to respond and find out the exact cause of the accident through cooperation with relevant authorities.”

On Dec. 24, five workers from the Gwangyang steel mill were injured in an explosion, which led to the closing of a bridge near the plant.

Various types of steel are manufactured at the Gwangyang steel mill.

Posco halts operations at Pohang plant due to flooding from typhoon