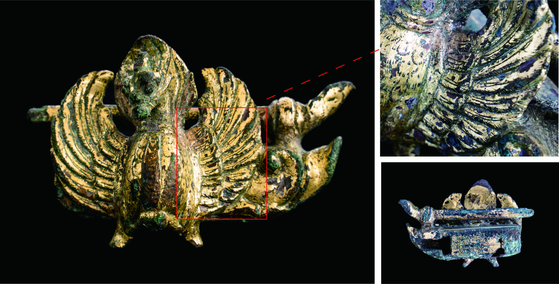 A gilt-bronze phoenix padlock of the Unified Silla (668-935) period has been recently excavated in Gyeongju, North Gyeongsang. [CULTURAL HERITAGE ADMINISTRATION]


A unique gilt-bronze phoenix padlock of the Unified Silla (668-935) has been excavated from the lower layer of the Hwangnyong Temple site in Gyeongju, North Gyeongsang, the Cultural Heritage Administration (CHA) announced Wednesday.

According to researchers, the padlock is probably the most significant item excavated from the site, as an artifact of such kind has never been found before in Korea.

The padlock, measuring 6 centimeters (2.4 inches) in length, is believed to have had been a valuable item as it is delicately crafted to express feathers and scales of a phoenix. Two other padlocks of the Unified Silla and Goryeo (918-1392) periods have also been discovered during the recent excavation project. One is an iron padlock and the other is bronze.

The area that the padlocks were excavated from appears to be where important items were stored.

“It is unprecedented to discover three padlocks dating back to the Unified Silla and Goryeo periods in such a small site,” said Park Sung-jin from the Gyeongju National Research Institute of Cultural Heritage. “We’ll continue research to find out more about this Silla temple and the significance behind it.”