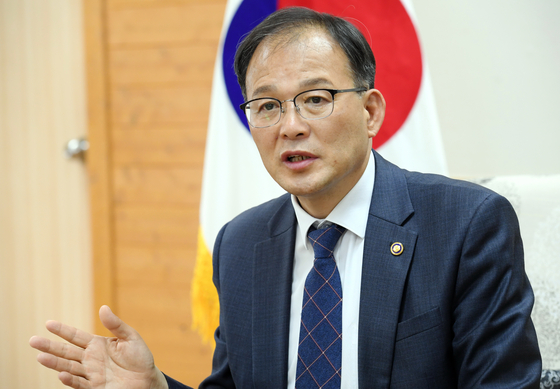 While the Covid-19 pandemic has dominated headlines throughout 2020, climate change has also become a real global threat, from the wildfires that devastated California and Australia to the frequent typhoons that hit the Korean Peninsula this summer.

Park, a long-time employee of Korea Forest Service who headed the agency since December last year, said efforts should not only be focused at home but also around the world.

Park particularly emphasized the restoration projects of the Korea Indonesia Forest Center (KIFC), which will soon celebrate its 10th anniversary.

The biggest project has been the restoration of peatland in Indonesia.

It's the same point that Park focused on during his recent video conference with his Indonesian counterparts during their regular Forestry Cooperative Committee meeting, which included the participation of the Indonesian Environment and Forestry Minister Siti Nurbaya Bakar in September.

The expansion of global cooperation comes on the heels of the Korean Forest Service preparing to host the world’s largest forestry event, the World Forestry Congress, in May 2021 in Seoul under the theme “Building a Green, Healthy and Resilient Future with Forests.”

It is the first time that the global forest event is being held in Asia in 43 years. The last time was in 1978, when Indonesia was the host.

Below are edited excerpts from a recent Korea JoongAng Daily interview with Park.


Q. What is the biggest project currently being conducted between Korea and Indonesia?

A. The biggest project that the Korea Indonesia Forest Center is currently working on is the restoration of the peatland in Jambi Province in Sumatra.

The peatland is an area in which organic matters such as trees and plants are buried for an extensive period without decomposing or carbonizing. It is usually located in shallow wetlands or submerged in times of monsoon and only slightly appears in the time of a dry period.

The peatland has the capacity to store carbon 10 times more than ordinary land.

However, huge amounts of smoke are released when draining water and setting fire to the land to repurpose it as farmland or for palm oil.

Unlike the forest fires in Korea, which are either surface or crown fires, fires on peatland are underground.

These kind of fires are not easy to put out. Massive amounts of carbon will be emitted into the atmosphere, which will become a major contributor to climate change.

The smoke will not only cause damage to the country, but also affect the daily lives of people living in neighboring countries.

The restoration project in Jambi Province is to restore the original form of the peatland within the protected Londerang area by constructing dikes.

It also includes planting trees appropriate for peatland and educating residents on fire prevention while offering programs that would benefit their livelihoods.

Furthermore, the goal is to foster eco tourism.

While peatland in Korea is almost nonexistent, Korea’s forestation and management techniques on top of its agricultural development experience will benefit the project. 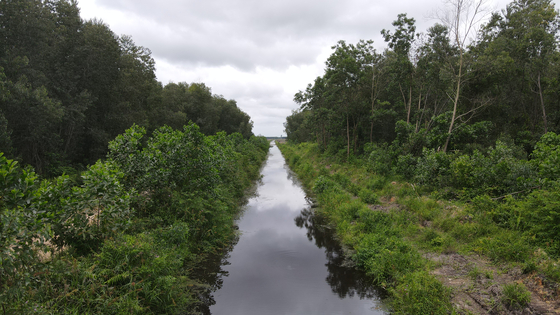 
Q. To many Koreans, peatland is an alien concept. Can you explain the peatland in Indonesia and its importance?

A. Indonesia is home to the world’s second largest peatland after Brazil, which covers 22.5 million hectares, twice the size of Korea [according to Global Wetlands 2019 study].

During the 2015 forest fires in Indonesia, considered one of the worst global environmental disasters, 2.6 million hectares were burned. It resulted in 1 billion tons of carbon emitted into the atmosphere.

It has been reported [that due to the forest fires] 500,000 people including those living in neighboring countries have suffered respiratory illnesses. The fires also caused 1.8 trillion won [$1.6 billion] of economic damage.

Considering the preservation value as well as the importance in the fight against climate change, the restoration of the peatland in Jambi Province in Indonesia using Korea’s forestation techniques and experience will be a meaningful project.

Many countries are expressing interest in the preservation of peatland in Indonesia and have been pursuing cooperative projects.

I think Korea’s contribution in fighting climate change through the conservation of peatland in Indonesia has significant meaning.


Q. Can you tell us more about the Korea Indonesia Forest Center?


A. As the forestation cooperation between the two countries deepened, the two sides in June 2010 agreed to set up a joint forestation center.

Since January 2011, we have been preparing for the launch of the center within Indonesia’s Ministry of Environment and Forestry. On July 21 that year, the center was launched.

The center is co-headed by an official from the Korea Forest Service and the Indonesian Ministry of Environment and Forestry and focuses on forest-related cooperation in both countries.

Lee Sung-gil, the fifth Korean co-director, has plans to prepare for a meaningful 10th anniversary celebration including the review of the center’s achievements in the past decade and vision for the next 10 years.


Q. Can you tell us about relations between Korea and Indonesia?


A. The two countries' relationship started with the setting up of consulates in 1966 and expanded to an embassy-level diplomatic relationship in 1968.

As Korean companies ventured into Indonesia since the diplomatic relationship was formed, so has forestry cooperation grown between the two countries.

Korea's first overseas investors Korea Development Company started a development project in Kalimantan, in the southern regions of Indonesia. In the 1990s, that forest-related business was changed to a more sustainable approach where new trees were planted after they were cut.

Currently, various Korean companies that are in Indonesia not only produce palm oils but also pulp, natural rubber and wooden biomass.

Thanks to the sufficient rainfall and daylight, trees in Indonesia grow at a faster rate, in some cases 10 times faster than in Korea.

Compared to our own natural conditions, there’s a huge natural advantage in forest-related businesses in Indonesia, which is undoubtedly attractive.

Korean companies, which notice such positive factors early on, have been conducting massive industrial forestry projects and have adopted a sustainable approach to replanting trees that were cut down.

Korean companies were not only able to achieve noticeable achievements in producing wooden goods but in expanding into other areas such as rubber and palm oil.

On the government level we were able to generate cooperation in restoration of mangrove forests, exchanging talents in forestry-related fields, strengthen capacity, create modern tree nursery and reforestation techniques.

We also succeeded in forming a sisterhood relationship with Indonesia's national parks, cooperating in preventing the trade of illegal lumber, reducing carbon emissions through prevention of deforestation as well as forest based ecotourism, biomass testing and restoration of peatland.

Since the Forest Cooperation Committee started in 1979 there have been 24 meetings as of 2020. It has become an important meeting in which both countries discuss current issues while seeking areas to cooperate.

Q. How much potential do you see in Indonesia as a partner for Korea?


A. China ranks top in population size at 1.43 billion and India trails behind with 1.38 billion. The third largest by population is the United States with 330 million. But many find it surprising that Indonesia ranks fourth with 270 million.

While many Koreans think of an island in Southeast Asia when they think of Indonesia, the country's landmass is 19 times larger than Korea. And it has a solid domestic market thanks to the 270 million people. It has numerous natural resources including coal, natural gas, tin, copper and nickel.

Thanks to its environmental conditions, it is good for farming as it is located near the equator, it mass-produces palm oil, rubber, cocoa and coffee.

Indonesia in recent years has been enjoying an annual average [economic] growth of 5 percent, and it is one of the biggest consumers of Korean Hallyu [Korean Wave] culture, from K-pop to K-dramas.

While historically it has been colonized by the Dutch for a very long time and was also invaded by Japan during World War II, since 2000 a democratic government has taken over, its local politics have been stabilized, and the country has been able to focus on its economic development.

The country is made of hundreds of different people and languages, and there’s a wide variety of religions. As such, the biggest challenges have been how to unify such differences. Its national motto is "Bhinneka Tunggal Ika," which means "unity under diversity."

I worked at the Korean embassy in Indonesia in the 2000s, so I am well aware of the mobility and the potential development Indonesia has. I have a special affection for the country.