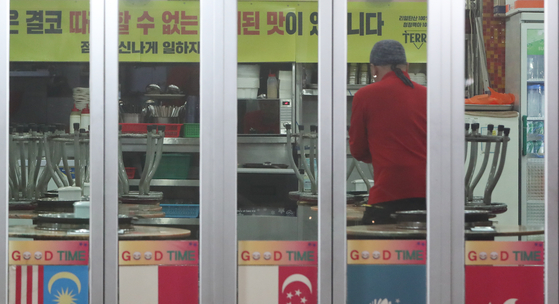 A restauranteur is preparing to close his diner at 9 p.m. on Nov. 24 when the Level 2 social distancing scheme went into effect. Under the Level 2 scheme, restaurants and cafes are only allowed to take takeout and delivery orders after 9 p.m. [NEWS1]

Restaurant coupons are making a comeback as discounts for food ordered via an app.

The eat-thrice-and-get-10,000-won program was put on ice after the government took the country to Level 2 social distancing on Nov. 22 and ordered restaurants closed at 9 p.m. sharp. But the food services lobby has argued that the suspension of the coupons makes no sense even with the early closures, as customers could still use them before closing time.

The government has responded by reprising the program so it can be used for the purchase of food via delivery apps, though it is not clear when exactly this will happen and what form it will take.

“Due to higher quarantine levels, we have decided to convert restaurant coupons to noncontact use,” Finance Minister Hong Nam-ki said during the government economic meeting held on Thursday.

“[However,] we will prepare to resume the consumer spending vouchers once the quarantine regulations are eased.”

The finance minister added that the government will hold its Christmas market between Dec. 19 through 27 online. The market, held for the first time last year at Gyeongbok Palace, featured items from small companies and handicrafts.

Hong said stricter social distancing has been implemented due to the rising number of confirmed cases, and the finance minister again asked the public for full cooperation.

“I believe so far our economy has been able to increase our adaptability to the coronavirus,” Hong said. “Using this adaptability, which has been built through strict quarantine efforts, we should make a coordinated rush to recovery.”

The government had to postpone twice the release of coupons, including discounts for restaurants as well as accommodations.

The coupons were targeted at boosting the domestic market.

While the country’s economy is expected to contract full year 2020, the first time in more than two decades, the better-than-expected performance in exports is projected to cushion the fall.

The biggest concerns have been frozen consumer spending.

Spending went up in the second quarter as a result of government emergency relief grants distributed to every Korean household, but the one-time grant effect didn’t last long.

The government was hoping to contribute to consumer spending with discount coupons.

The first delay came after the first resurgence of the coronavirus in mid-August. The second came with the recent resurgence, where the number of daily cases have exceeded 300.

The situation has only gotten worse as much stricter social distancing is currently under consideration, with the number of daily confirmed cases exceeding 500 for the first time in eight months.

On Thursday, 583 people were confirmed with the coronavirus. Among those confirmed, 553 were infected cases that were transmitted locally. It is the second biggest daily number since March 3, when 600 were found to be infected.

Since Tuesday, restaurants have had to close at 9 p.m. After those hours, only delivery and takeout are allowed. All coffee shops are limited to takeout, which is much stricter than the rules in August and September.

Then, only franchise coffee shops such as Starbucks were banned from having customers drinking within the store.