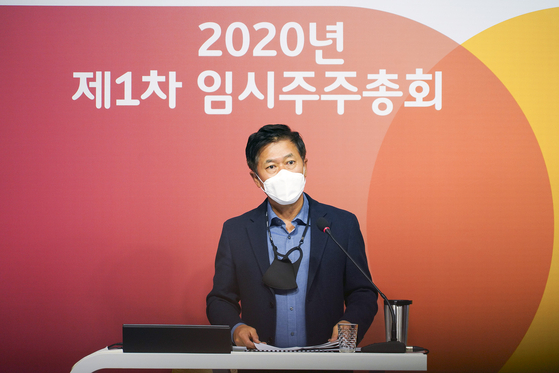 
T Map Mobility, a spinoff from SK Telecom, has visions of flying and self-driving cars, though in the meantime it will be spamming users of the T Map navigation app with advertisements and insurance advice.

“[T Map Mobility] will provide a “mobility life platform” that encompasses transportation, parking, designated driver services and flying cars that could connect Seoul and the nearby Gyeonggi metropolitan,” SK Telecom CEO Park Jung-ho said during a shareholder meeting Thursday in which the split was approved.

The spinoff resolution was passed with 99.98 percent of the shares represented by the present shareholders voting in favor of the decision.

The announcement for a new entity, due to be established on Dec. 29, gained a great deal of attention last month as Uber decided to invest $50 million in T Map Mobility and another $100 million in a joint venture between Uber and the mobility unit.

SK Telecom said that Uber will own about 5 to 6 percent of the new entity, as it was valued by the U.S. company at an estimated 1 trillion won ($905 million).

The chief said that the separation is intended to better unlock business opportunities in the transportation-linked technology sector.

“People spend the most money on transportation after food and housing,” Park said, “We launched the new unit to revitalize the mobility industry as we look to innovate the way people and objects move using information and communications technology.”

Many of its future services will likely be integrated into the mobile app T Map — now a dominant mobile navigation service used by 75 percent of domestic drivers.

In addition to the more long-term objectives, like flying cars, the telecom company suggested that the app will be used for advertising, insurance recommendations and other revenue-generating features.

It also hinted at expansion of existing ride-hailing offerings by introducing a subscription-based service that will offer discounts to all of SK’s mobility services, from car rentals and car sharing to shared scooters and parking.

SK Telecom to spin off mobility unit with funds from Uber