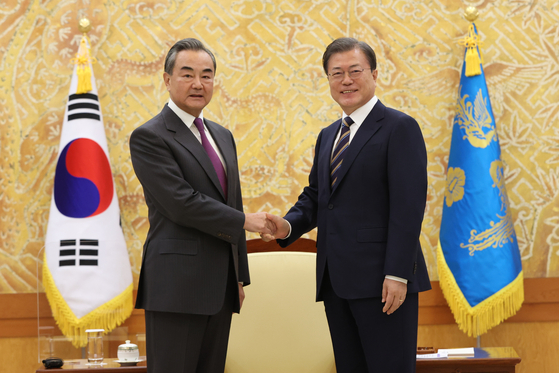 
South Korean President Moon Jae-in told Chinese Foreign Minister Wang Yi Thursday that Seoul will continue its efforts to bring about a formal end to the 1950-53 Korean War and establish a denuclearized peninsula.

In a visit to the Blue House Thursday, Wang relayed a message from President Xi Jinping, saying that the Chinese leader places “great importance on his friendship and mutual trust” with Moon.

Moon said, “Our government will not cease in our efforts with the international community, including China, to end the war and establish complete denuclearization and permanent peace on the Korean Peninsula,” referring to the Korean War, which ended in a ceasefire.

He went on to extend gratitude to China for playing a “cooperative, constructive role” in the Korean peace process so far and asked Wang to play a role in “advancing Seoul-Beijing relations and inter-Korean relations.”

Moon also expressed his wishes to “further closely develop our strategic cooperative partnership,” and extended his regards to President Xi while expressing satisfaction that the two countries had maintained bilateral exchanges despite the pandemic.

Moon said he hoped the 30th anniversary of the establishment of bilateral ties in 2022 would become an occasion to “prepare a long-term plan for a new 30 years” of Korea-China relations.

"My visit to South Korea, even though the Covid-19 situation has yet to end, is to show through actual action the importance we place on China-Korea relations and to show our confidence that Korea can overcome the Covid-19 situation,” Wang told Kang at the beginning of their talks Thursday morning. “Our two countries’ relations, having endured the ordeals of Covid-19, are now showing greater signs of robustness and vitality.”

Kang and Wang held a 90-minute meeting at the Foreign Ministry in central Seoul to talk about Covid-19 responses, exchanges between their leaders and high-level officials, the Korean Peninsula situation and other regional and global matters.

Wang said, “Korea and China as strategic cooperative partners are coordinating and working together to resolve regional and global issues.”

Kang said, “Today, we will evaluate a wide range of areas based on the joint intentions of our leaders for the continued development of our two countries relations, and ahead of the 30th anniversary of the establishment of our bilateral ties in 2022, I look forward to an exchange of opinions on further substantiating the strategic cooperative relationship of our two countries.”

Key issues during Wang’s trip included a visit to South Korea by Xi and a trilateral summit hosted by Korea with the leaders of China and Japan. Moon invited Xi to make a state visit this year, a trip initially expected to take place last spring, but it was pushed back because of Covid-19. Likewise, Korea has been working on a trilateral summit among Moon, Chinese Premier Li Keqiang and Japanese Prime Minister Yoshide Suga in December, a matter that was discussed by Kang and Wang, said a Seoul Foreign Ministry official.

Wang, speaking to reporters at the Foreign Ministry after the talks, said that Xi’s visit will come “as soon as the conditions are ripe.”

He continued, “What is important for the two sides to do is to continue to build the conditions for a visit."

When asked to elaborate on what conditions are needed, Wang pointed to his mask and indicated the containment of the Covid-19 pandemic. “Everyone is wearing a mask right now. All this will affect [Xi's visit]."

He expressed thanks for Moon’s invitations for a state visit to Korea and said, “I believe this shows the Korean side places in high estimation China-Korea relations and its intentions to actively strengthen bilateral relations.”

Wang played down a question on Sino-U.S. rivalry saying, "The United States is not the only country in this world. There are some 190 countries in the world, and they are all independent, autonomous countries. Among them are China and South Korea. China and Korea are close neighbors that should have frequent travel, like relatives.”

Wang said that areas to strengthen in Seoul-Beijing relations include cooperation in Covid-19 containment, economics and trade and regional stability as well as resolving the Korean Peninsula situation. He added Korea and China should discuss expanding the scope of their bilateral FTA.

Wang’s visit to Seoul follows a trip to Tokyo Tuesday and Wednesday and came in the aftermath of the U.S. presidential election earlier this month.

While U.S. President-elect Joe Biden is expected to take a more nuanced, measured approach to China than the Donald Trump administration, the former American vice president has also indicated plans to build a front of U.S. allies to reassert American global leadership and remain tough on Beijing while cooperating in areas where they can.

Wang last visited Seoul in early December 2019 and held talks with Kang and paid a courtesy visit on Moon. 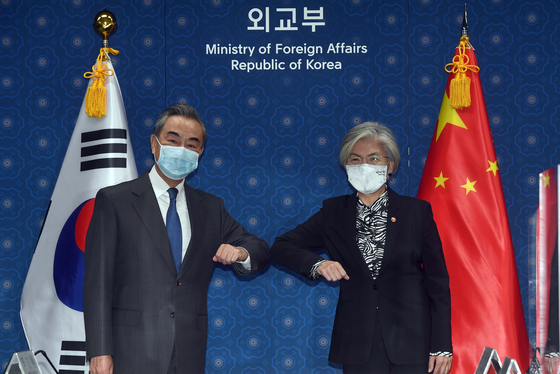