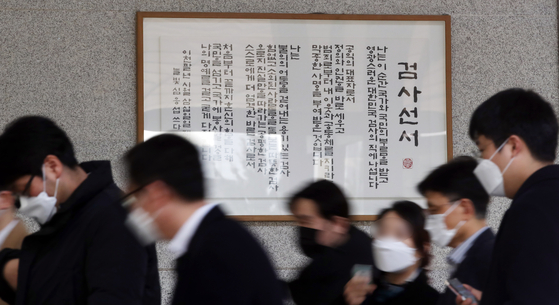 People walk past a framed prosecutors' oath at the Seoul Central District Prosecutors' Office in Seocho District, southern Seoul, Thursday. Prosecutors have been holding meetings to discuss the justice minister’s suspension of Prosecutor General Yoon Seok-youl over alleged ethical and legal breaches, with some issuing statements protesting the action. [YONHAP]

Prosecutors intensified their protests Thursday against the justice minister’s suspension of Prosecutor General Yoon Seok-youl over alleged ethical and legal breaches, releasing a series of statements claiming the move infringed on the guarantee of political neutrality and independence for the prosecution.

Six top district prosecutors, including Cho Sang-chul of the Seoul High Prosecutors' Office, urged Choo to reconsider her decision in a statement posted on ePros, the prosecution’s intranet forum, Thursday morning, stating that their recommendation was based on a “level-headed and objective evaluation of the current situation.”

They said in the statement, “The main reasons for the disciplinary action are not about the prosecutors’ personal issues but are related to the execution of his duties, thus this is an issue related to the guarantee of political neutrality of the prosecution.”

They added that that the prosecutor general's term should be legally guaranteed as it is designed to protect the prosecution from political interference.

A group of 27 senior prosecutors from the Supreme Prosecutors’ Office in Seoul also issued a statement calling for Choo’s suspension to be withdrawn, calling it “illegal and unjust.”

The Uijeongbu District Public Prosecutor’s Office likewise issued a statement Thursday on ePros, urging Yoon's suspension to be lifted and stated that “the justice minister, as a public official, should keep political neutrality.”

Choo held a surprise press conference Tuesday evening to announce Yoon’s suspension from duty and the start of a process to discipline him because an internal investigation by the Justice Ministry discovered that he had committed allegedly serious and grave illegalities such as unlawful surveillance of judges and violation of professional ethics. She also said that Yoon had violated his own political neutrality by hinting at a possible political career after his term.

A group of prosecutors in charge of research and planning at the Supreme Prosecutors’ Office said in a statement Wednesday that Choo’s actions “undermine the rule of law and violate the independence of the prosecution.” The message drew over 270 likes on the prosecution intranet by the following morning.

Yoon has denied the accusations and said he would start a legal process to fight Choo's decision.

Yoon on Wednesday filed an injunction with the Seoul Administrative Court to halt the execution of Justice Minister Choo’s order to suspend him from duty, according to his legal representative, Lee Wan-kyu. He lodged a formal lawsuit to nullify the measures the following day.

Lee said that Yoon argued that he had not been given ample opportunity to explain himself on the six accusations raised by Choo to remove him from duty.

However, the Justice Ministry said Thursday that a seven-member disciplinary committee will convene next Wednesday to examine the level of action to be taken against Yoon. Yoon and his lawyer will be asked to attend the meeting.

A Realmeter poll released Thursday showed that 38.8 percent of 500 respondents were in support of Choo’s suspension of Yoon, while 56.3 percent thought “it was wrong.”