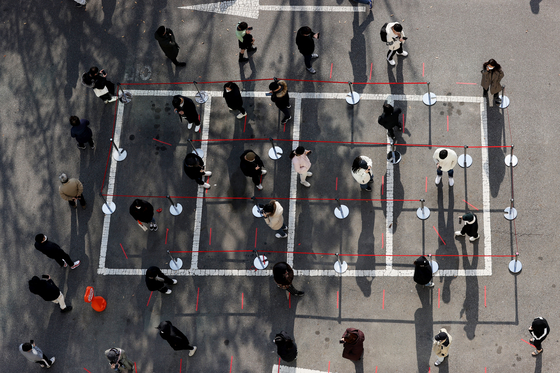 The last time Korea saw more than 500 new infections in a day was in early March, in the aftermath of the country’s biggest cluster from the Shincheonji Church of Jesus in late February.

There were 382 new cases Tuesday. The steep jump from Tuesday to Wednesday was mainly attributed to growing clusters on a military base in Yeoncheon County, Gyeonggi, and at an aerobic center in Gangseo District, western Seoul. Both now have nearly 70 cases each.

Of Wednesday’s 583 new cases, 553 were domestic infections: 208 in Seoul, 177 in Gyeonggi, 45 in South Gyeongsang, 19 in Busan, 17 in Incheon, 16 each in South Chungcheong and North Jeolla, 14 in Gwangju, nine in South Jeolla, eight each in Gangwon and North Chungcheong, six in Ulsan, two each in North Gyeongsang and Jeju Island and one in Daegu.

Among 30 imported cases Wednesday, six were from the United States, four from Indonesia, two each from Myanmar, Canada and Ghana and one each from the Philippines, Uzbekistan, Bangladesh, India, Japan, China, Poland, Ukraine, Switzerland, Britain, Hungary, Denmark, Zambia and Gabon.

Two people died Wednesday, raising total deaths to 515, while 125 people recovered, bringing entire recoveries to 26,950. As of Wednesday at midnight, Korea had counted 32,318 coronavirus patients in all.

Lee Sang-won, a spokesperson for the Central Disease Control Headquarters, said in a Thursday briefing that the current size of daily increases was expected to continue throughout this week and possibly into early December, stressing the virus was reaching so many places at once.

“We’re seeing numerous sources of infection nationwide at restaurants, schools, saunas, churches, military bases and more,” said Lee. “The routes of infection are diversifying and the main age group that’s leading this spread has become younger than before, who tend to be more physically active,” Lee continued.

“That means in terms of [the government’s] preventive measures, there’s a wider scope of subjects to manage,” Lee went on.

Health officials blamed the cold weather as another reason why the virus was spreading, as people spend more time socializing indoors and don’t open windows for ventilation.

When young people inadvertently spread the virus to friends, families and colleagues, it can spread more extensively before being noticed by health officials because they tend to be asymptomatic.

Some of these cases cause chains of infections, while others cause clusters, like the ones at the Yeoncheon military base and the Seoul aerobic center.

The Ministry of National Defense announced Thursday that all soldiers will be prohibited from leaving their bases for vacations or leaves until Dec. 7, in what the military called a pre-emptive imposition of Level 2.5 social distancing restrictions. 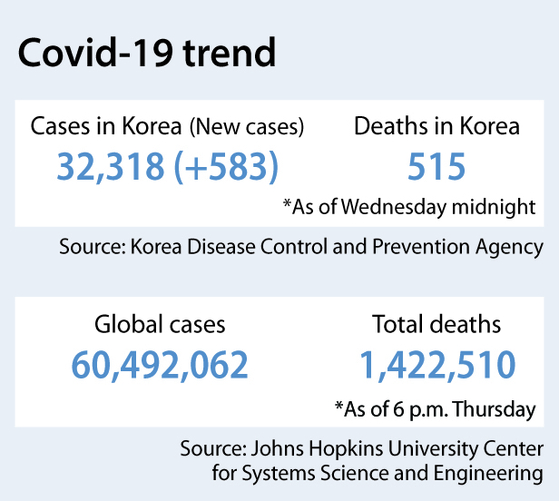 Level 2.5 is the fourth-highest level on the five-tier social distancing system.

Despite surging cases, central health authorities Thursday said it was too early to raise the Seoul metropolitan area’s social distancing level by another notch to Level 2.5, saying if members of the public abide by the current Level 2 guidelines, cases may begin to fall as early as next week.

The Seoul Metropolitan Government, however, hinted in a Thursday press briefing it may impose stricter measures, saying it would soon start holding meetings with experts to discuss the idea.