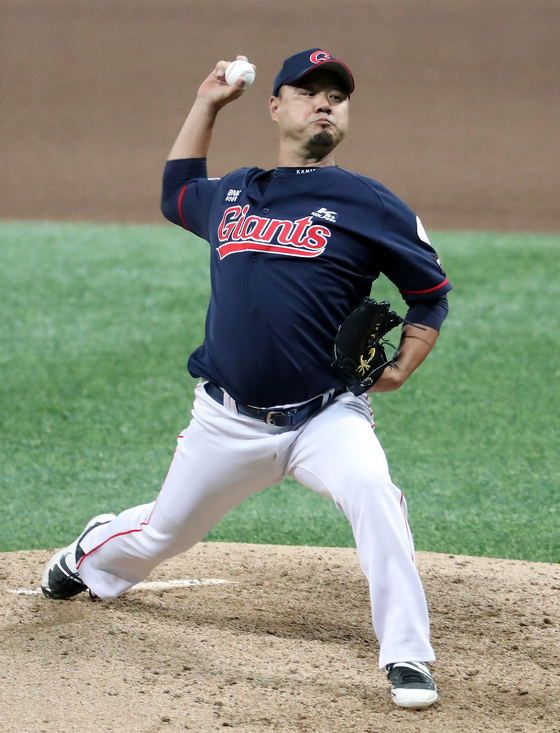 Lotte Giants pitcher Song Seung-jun throws a pitch during a game against the Kiwoom Heroes at Gocheok Sky Dome in western Seoul on June 17. [NEWS1]


The Lotte Giants have appointed pitcher Song Seung-jun as a player-coach for the 2021 season, giving the veteran a year to transition to a new role off the field.

After years of playing in the United States, Song made his KBO debut with the Giants in 2007. Throughout 14 seasons in the KBO, all with Lotte, Song has a career 4.48 ERA with 109 wins, 85 losses and two saves.

The Giants announced Thursday that they will assign Song as a player-coach as a mark of respect for his performance and all he’s done with the Giants.

As Song has a great relationship with both the Lotte players and coaching staff, he is expected to act as a bridge between the two. In his new role, the 40-year-old will continue playing for the 2021 season and end his career with a retirement game next year.

Following his retirement, the Giants are expected to support Song as he adjusts to a new role as a full-time coach. Typically the process would see him experience different roles in the front office, field, marketing and more.

“I’m thankful to the club for giving me the option to end my career so well,” Song said. “I will have played only for one club for 15 years by next year. I think I’ve played well throughout that time so I’m proud. I’ll teach the players all the experience I’ve gained throughout this time so our team can reach a higher point.”

Born on June 29, 1980, Song was a late addition as he headed to the United States, rather than to the KBO, after graduating from high school. He signed with the Boston Red Sox as an amateur free agent in February 1999.

But Song never got to reach the major league stage. Having only played in the minor league throughout his career in the United States, Song returned to Korea and joined the Giants.