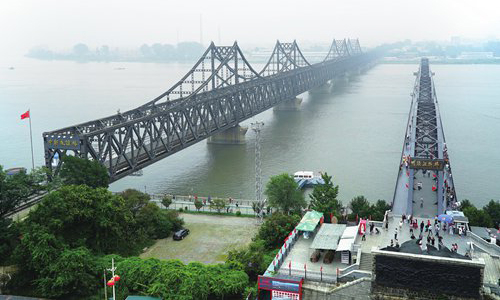 
Total trade between North Korea and China decreased 73 percent on year due to border restrictions imposed by Pyongyang amid the coronavirus pandemic. The decline is sharper than when North Korea faced a round of United Nations sanctions in 2018 that resulted in a 57 percent decline.

The Korea International Trade Association (KITA) on Friday released a trend report on North Korea’s trade with China during the third quarter. Since the border restrictions have continued through November, KITA predicts that the on-year drop in trade between North Korea and China will be 80 percent by the end of this year.

North Korea has been ramping up cleanup measures ahead of the 8th Congress of the Workers’ Party in January, which will impact trade.

Trading recovered slightly in May and June, but started dropping again from July to September.

Cumulative imports from China to North Korea for the first three quarters dropped by 73 percent year-on-year. The drop was relatively lower for necessities such as cooking oil, flour, sugar and medical supplies.

Cumulative exports to China declined by 70 percent year-on-year in the third quarter. Exports of manufactured items like watches and wigs each dropped by more than 80 percent, heavily impacted by the border restrictions.

September’s exports to China saw a 84.37 percent decline compared to February’s, according to KITA, and imports dropped by 90.43 percent. Total trade in September was $20.8 million, less than one-tenth of February’s trade and a 91.4 percent on-year drop.

North Korea’s trade with Russia rose 15 percent on year, and imports of food and medical supplies rose by 121.3 percent. Imports of flour rose by 1,340 percent, and of sugar by 4,324 percent.

KITA speculated that North Korea is relying on Russia for essential items, and the imports from Russia may have been treated as relief aid when passing customs.

“North Korea strengthened border controls from July in preparation for the 75th anniversary of the Workers’ Party on Oct. 10. Hence, its international trade in the second half of the year dropped by a large amount,” said a spokesperson for KITA. “North Korea will not be able to sustain the current level of blockade next year, so there is a possibility that North Korea will expand imports in food and products related to health and hygiene."