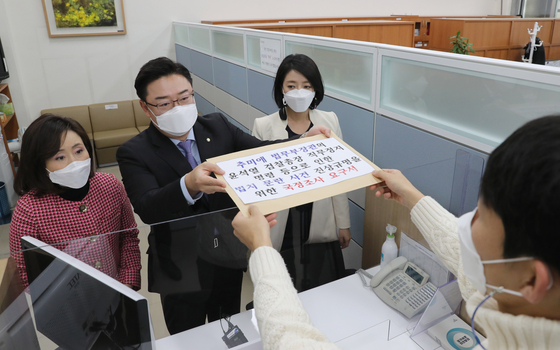 
The main opposition party on Friday submitted a motion to the National Assembly to start a parliamentary inquiry into the validity of the justice minister’s suspension of the prosecutor general.

Rep. Kim Sung-won, deputy floor leader of the People Power Party (PPP), submitted the motion in the morning as a challenge to Justice Minister Choo Mi-ae’s disciplinary actions against Prosecutor General Yoon Seok-youl. According to Kim, 103 lawmakers from the PPP, three members of the People’s Party and four independent lawmakers signed the motion.

“The public is feeling uneasy about the resurgence of Covid-19 infections, economic damage and skyrocketing real estate prices,” Kim said. “We must end the fight between Justice Minister Choo and Prosecutor General Yoon as soon as possible.”

On Tuesday evening, Choo made the unprecedented move of suspending Yoon from duty and started a disciplinary process over suspected ethical and legal breaches. In a press conference, she made public charges against Yoon such as illegal surveillance of judges and breach of his political neutrality.

Calling her action “illegal” and “unjust,” Yoon filed an administrative suit on Thursday demanding Choo withdraw her orders. The Seoul Administrative Court assigned the case Friday to Judge Jo Mi-yeon. Dates for court sessions are yet to be scheduled.

The PPP's motion on Friday was a kind of echo of the ruling party leader's attempt to pressure Yoon to resign. Democratic Party (DP) Chairman Lee Nak-yon said Wednesday morning that a parliamentary investigation must take place into the accusations against Yoon — and demanded he step down.

Rep. Joo Ho-young of the PPP said Friday he also wants a parliamentary inquiry to expose the illegality of Choo’s actions.

“The rule of law was destroyed in the latest development, and we definitely need a parliamentary probe,” Joo said. “DP Chairman Lee has requested one, and we passionately welcome his proposal. We hope this probe will take place as soon as possible.”

As the opposition seconded his idea, Lee tried to slow down the process on Friday.

President Moon Jae-in, who appointed Yoon as prosecutor general in July 2019 and Choo as justice minister in January, maintained his silence on their war on Friday. The Blue House said he was briefed about Choo’s decision to suspend Yoon on Tuesday, but made no comment.

Gallup Korea said it polled 1,005 adults from Tuesday through Thursday. During the same period, the disapproval rating of the president went up from 45 percent to 48 percent.

The 40-percent approval rating is the lowest in three months since Moon scored 39 percent in the second week of August amid public dissatisfaction with his government’s real estate policy.

The poll has a confidence level of 95 percent and its margin of error was plus or minus 3.1 percentage points.

As the feud between Choo and Yoon continues, a senior lawmaker from the DP said Moon must replace both.

“Their leaderships as the minister of justice and prosecutor general are ruined, and neither can perform their jobs,” said Rep. Lee Sang-min, a five-term lawmaker from the DP, in a Facebook message. “I strongly request the president to fire both of them as soon as possible.”