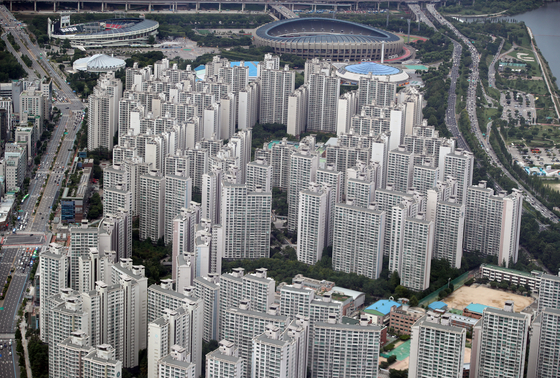 A view of apartments in Songpa Distirct, southern Seoul, of Seoul Sky at the top of the Lotte World Tower. [YONHAP]

With new real estate measures being passed that will raise the cost of ownership and penalize sales, property owners are choosing to pay now rather than pay later.

Even with the gift tax, it makes more sense for them to transfer their real estate to others than hold onto the properties and get nickel-and-dimed from here to eternity.

According to Korea Appraisal Board, roughly 119,249 homes were given away this year as of October. It’s the highest yearly figure since the related statistics were first compiled in 2006.

The situation was most evident in affluent Gangnam areas in southern Seoul.

As of October this year, a total of 5,726 apartments in the three Gangnam area districts south of the Han River— Gangnam District, Seocho District and Songpa District — were handed over as gifts. This accounts for 30 percent of the number of total giveaways in Seoul.

The recent boom in giving away properties is largely due to the government’s continuous attempts to increase the tax rates related to real estate.

The Moon administration in July announced that it will raise the maximum rate of the capital gains tax — the tax on profit made from selling apartments — to 72 percent from the current 62 percent. The new tax will be applied starting June next year.

To get under the wire and avoid the new taxes, people are scrambling to pass down their properties to their families or others. Gift taxes still apply to those transfers — which range from 10 to 50 percent — but many homeowners will face stiffer payments if subjected to the newly-raised capital gains tax and comprehensive real estate tax.

Of all real estate transactions made in Gangnam District, Seocho District and Songpa District this year, roughly 22.7 percent were transfers.

In Seoul, the percentage was about 13.4 percent while it was 5.7 percent across the country. This is a record high since related statistics were first collected in 2006.