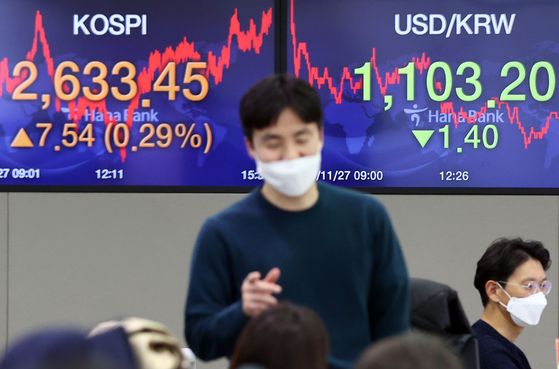 The final Kospi and dollar prices against the won are displayed on the screens of a dealing room in Hana Bank in Jung District, central Seoul, on Friday. The benchmark Kospi closed at 2,633.45 on Friday, up 7.54 points, or 0.29 percent, from the previous day. [YONHAP]

Korea stocks have hit a series of new highs in recent days as foreign investors return to the market on hopes that a Covid-19 vaccine will put an end to the pandemic and a new U.S. administration will help Korean and Chinese exporters.

After the main index on Nov. 23 broke the 2,600-point mark for the first time, it has been trending upward — largely led by foreign investors. In November alone, foreign investors purchased a net 7.1 trillion won ($6.4 billion) of shares as of the 24th of the month. During the same period, retail investors offloaded 5.96 trillion won while institutions sold 980 billion won.

Korea stocks are now up roughly 80 percent from the year's low, which was hit on March 19 when the index touched 1,457.64. In March alone, foreign investors offloaded roughly 12 trillion won of shares — largely due to the uncertainties amid the Covid-19 pandemic.

Improved sentiment on the part of foreign investors is the major reason why the market has been showing quick signs of recovery.

“In August and September of the year, foreign investors showed a passive attitude toward the market due to the uncertainties in the overall economy,” said Cho Byung-hyun, a market analyst at Yuanta Securities. “However, with the decreasing uncertainties after the U.S. presidential election and the hopes of Covid-19 vaccine development, foreigners have been returning to the local market faster than ever before.”

The anticipations for large cap earnings next year seem to have driven the gain as the Covid-19 outbreak will likely keep boosting demand for chips.

Experts say the increase of the Kospi index is expected to continue at least for the rest of the year and possibly till the first half of next year.

On Nov. 25, researchers at Korea Capital Market Institute (KCMI) held a briefing on the prospect of next year's economy and stock market at the Financial Investment Center in Yeouido, western Seoul.

The researchers said the Kospi will continue showing an upward trend following next year, most likely to reach the 2,700 to 2,900 point by the end of the next year.

According to Jang Geun-hyuk, a macro-financial analyst at KCMI, more overseas investment, as well as young local retail investors, are expected to enter the stock market as the country’s economy recovers.

Brokerage houses in Korea agree on the forecast.

The fast growth also raises some concern that a bubble is forming — but local analysts say the return of foreigners alone will support the index.

“It’s true that some items are priced higher than they should be, but considering the beginning of the year, when lots of foreigners offloaded their shares, there is still room for them to return," said Park Soo-min, an analyst at Shinyoung Securities. "We expect the upward trend is likely to continue at least until the end of the year."

More-than-enough liquidity in the market and hopes for improvement of the export figure are main forces boosting shares.

“I think it is not the time we should consider the valuation woes,” said Kang Hyun-jeong, an anylyst at Kyobo Securities. “Under the Joe Biden administration, the global economy can be normalized. With that, we can anticipate an improvement on international trade, as well as export figures, which can eventually lift the Kospi.”

“The near-zero interest rate is another driving force. As people who can't find the alternatives jump into the stock market, the main index is likely to rise further.”

Foreigners extended their buying spree for a 17th straight session — the longest since the 19-session streak that ended in August 2016 — purchasing a net 7.7 billion won, while retail investors bought a net 19.6 billion won. Institutions offloaded a net 28 billion won.