A view of downtown Seoul, where the offices of large companies are located. [YONHAP]


It’s not an HR revolution by any means, but the C-suite in Korea is looking a bit different these days — emptier, younger and less the object of desire on the part of lifetime employees.

The corporations are becoming more competitive in making promotions, while some of the best of the best are starting to rethink the scramble to the top.

Once filled by people who moved lockstep up the ladder, senior positions are now being filled more through merit and sometimes from the outside. It’s now more about what you do than how much time you spend at the office.

Newly appointed executives come from a diverse range of backgrounds. The large companies hire people outside of their own workforce, such as former business consultants and ex-executives from smaller companies, as well as promoting more women to lead businesses.

This can be demoralizing for those who have paid their dues.

According to one manager who's been working for the past 19 years at one of Korea’s largest companies, four among 30 colleagues have been let go, while five failed to make it to managerial positions.

“Promotions happen really quickly these days, and that’s why more people are giving up,” he said.

Office workers say the competition to get to the top has intensified compared to the past. The number of top promotions at Lotte Group companies and Emart are down 10 to 20 percent this year.

Recent statistics suggest how it has become harder to become an executive in Korean companies. Fewer than 1 percent of more than 847,000 people working for Korea’s top 100 companies by capitalization made it to executive positions, according to a recent report by Unico Search, a Global headhunting firm.

One executive is now responsible for 128.8 employees, much higher than nine years ago when the same figure was 105.2 people. This means the chances of being promoted to executive are getting slimmer every year.

“Top executives at our group used to be male employees hired through the company’s annual recruitment process,” said one employee who works for an LG Group company. “Now we have to compete with people scouted from outside, and women coworkers. It’s getting much harder for us to go up to the top.”

While the hefty paycheck of such positions can be luring to many, fewer people are enticed to make the effort to scramble up the ladder as they choose to work for longer in lower positions.

“The starting salary of an executive in Korea is around 150 million won [$135,500],” said one employee who works at one of the top 15 companies in Korea. “But the actual salary increase could be more than double, considering all the performance-related pay, discounts, and benefits you can access for free.”

Executive positions, however, are mostly short-lived and under a fixed-term agreement that lasts a maximum of two to three years. And the turnover is becoming even faster than before. Some executives leave the office in the first one or two years.

“Legally, an executives’ labor contract lasts for only a year, and is renewed every year based on performance,” said one manager at a local chaebol company. “For some companies, promoting a person to an executive position is a roundabout way of asking them to leave, especially for those deemed too political or troubling for the company.” 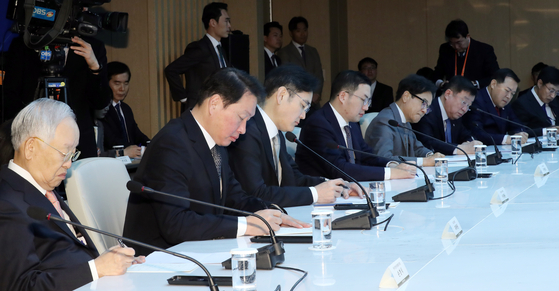 CEOs of local chaebol companies listen to a speech by President Moon Jae-in at the Korea Chamber of Commerce and Industry building in Jung District, central Seoul. [YONHAP]


Under these circumstances, fewer employees are willing to go “all-in” for promotions.

“I got married a bit later than others, and both of my children are in elementary school,” said a 49-year-old manager at a manufacturing company. “In order for my children to receive university tuition benefits [from my company], it's better to keep a stable job than taking an unstable position as an executive.”

The same thought was echoed by a 42-year-old working mom.

“Even though one of us [me and my husband] is promoted to an executive, one of us has to sacrifice their job for the other to get promoted and balance work and family life,” she said. “It’s better for us to stay as managers and keep our jobs as long as possible.”

A preference for work and life balance also has an effect.

“Not a single one of our executives had their day off on the weekends,” said one employee from Samsung Electronics. “They show up to the office on Saturday to take care of undone work and are on standby for the next week on Sunday. Even with the financial benefits, I don’t want to live that life.”

This thought is reflected in a recent survey. According to job portal Job Korea, only 34.7 percent of 1,084 respondents answered they are “preparing to become an executive.” When asked what their career goals were, the No. 1 answer was to “continue stable and secure job positions until retirement regardless of their positions in the office,” with 24.4 percent of respondents agreeing with that statement.

Some observers are concerned about this "stability first" atmosphere developing at Korean companies.

“Employees these days want to avoid hard work and not take responsibility for their actions. They are too calculating,” said one executive at an energy company. “This could demoralize other coworkers who are trying to take risks and embark on challenges in the office.”

Experts say companies should find ways to communicate a clear vision and direction of their company when training their employees.

“In an era where a lifelong job no longer exists, companies should not expect all their employees to give their all for the company,” said Professor Park Won-woo of Seoul National University Business School. “Employees are adapting to the changing work environment by deciding early on if they want to try out for executive positions or not.

“Companies should give aggressive compensation based on performance. HR managers should develop talent which can motivate employees to think their knowledge and expertise acquired through work can be used in their next jobs or future businesses,” said Park.