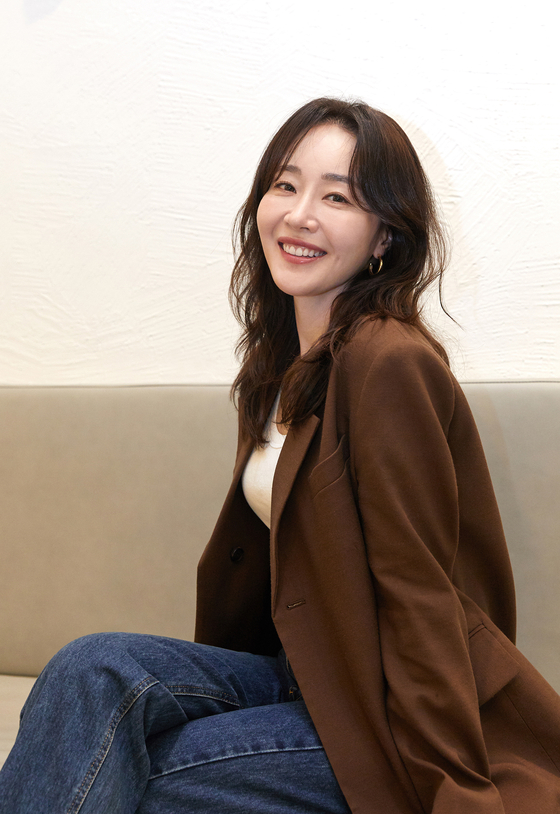 
Actor Uhm Ji-won’s portrayal of a first-time mother in the tvN drama series “Birthcare Center” earned empathy from mothers nationwide, but what might come as a surprise to her fans is that the actor has no child-raising experience herself.

“I couldn’t really check the comments due to filming schedules,” the actor said during a press interview via email on Friday. “But the responses that stick in my mind are comments that say I look like a real mother, or [my acting] reminds me of their own birth experience. When [the viewers] thank me for exactly portraying the feelings that they felt when they gave birth, they seem to recognize their own stories in my performance, and that’s when I felt good.”

Uhm never expected such enthusiastic responses: The series which follows first-time mom and workaholic Hyun-jin and other mothers at a postnatal care center shed light on the uncomfortable reality that the miracle of childbirth isn’t always a miracle for the mothers. Through the eight episodes which mainly take place at the center, topics like the hardships of raising a child and juggling work and childrearing are covered, but at the heart of every episode is the same question: Can a woman still pursue her own happiness once she becomes a mother? 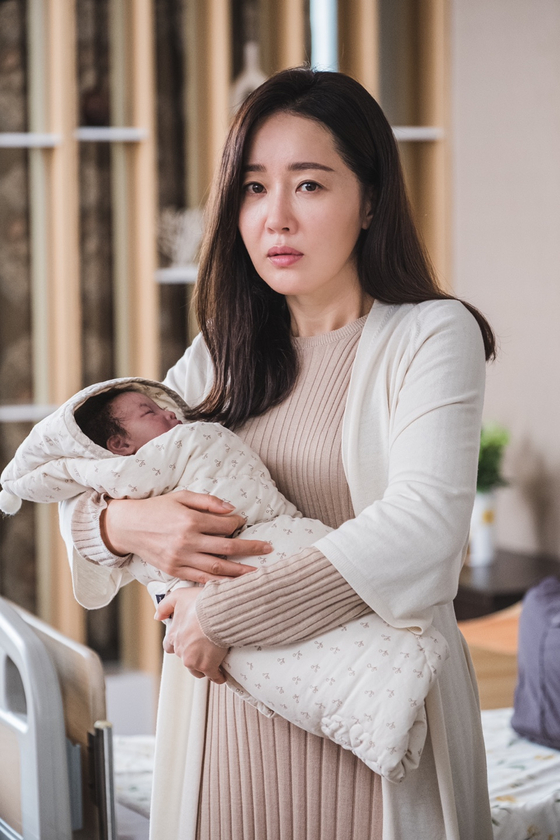 “I think it was because the stories are about what is happening around us, but we haven’t really had the chance to look into them because they are so close to us,” the actor evaluates. “I think people liked the series because they saw the stories as their own. As I was filming it, I was worried if [this series] would interest those without any childbirth or childrearing experience, but moreover, I was especially worried if it could touch those with such experiences. I’m so glad that people loved it so much.”

When it came to deciding to take on the role, Uhm said the well-crafted scenes and perfect balance between moral dilemmas and comical elements were what caught her attention when she read the script.

“I liked the fact that the characters would go through such a dramatic fluctuation of emotions in the limited setting of a care center, and I also liked that Hyun-jin’s social position shifted so radically through childbirth — from the youngest executive of a cosmetic conglomerate to the oldest mother,” Uhm said. “[But] the scene that boosted my confidence that I could do this well was the one with the first episode with the Grim Reaper: Hyun-jin’s life hangs in balance while she’s giving birth, but the way she returns with such ferocity and determination to live I think outlined conspicuously what kind of character she is.”

The actor said she also enjoyed being able to try her hand at the various genres woven through the script. 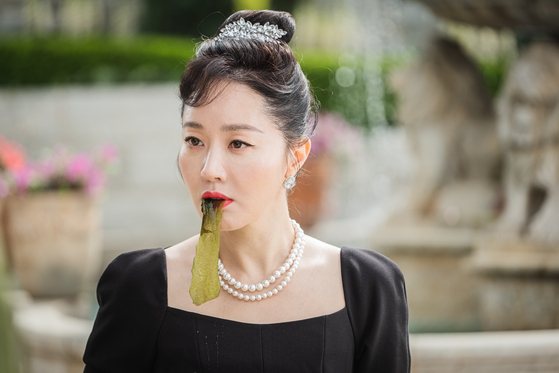 One of the scenes in ″Birthcare Center″ shows Hyun-jin eating miyeokguk (seaweed soup) which Koreans believe is good for pregnant and nursing women. [TVN]


“There were a lot of colorful scenes in which the characters ‘imagine’ what would happen, and those overcame boundaries of drama and comedy,” she said. “It was really fun to act them out, and since it could always become my own tale, I wanted to make it into everyone’s tale. As an actor, I always ache to show a little more when I act, and when I was Hyun-jin, that was possible.

“I liked that the story was a fusion of genres [which featured] not only comedy but also thriller and noir,” she said when asked what meaning the series holds for her. “I thought [through this series] a story which holds meaningful social messages could also be portrayed comically, and by featuring in this series I now have a chance to move upstage [in my career]. For me, this project became a gateway for another opportunity.” 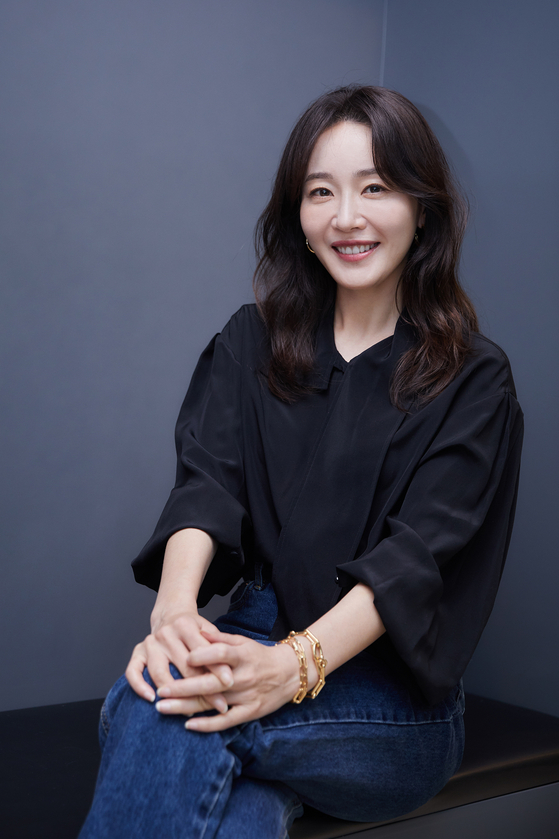 
“Birthcare Center” was also the actor’s first experience featuring in a series consisting of only eight episodes — half of the usual 16 episodes that Korean drama series tend to stick to. While the actor found the narrative was never boring and it was less physically exhausting, overall, she was sorry the story was cut short.

“The story was an open ending, but I do have a little bit of regret and wonder if it would have been better if the series aired 10 episodes,” Uhm said. “As shown in the last episode, I think Hyun-jin would have gone her own way [as a working mom]. If she misses things [while taking care of her child] her husband Do-yoon would help, and if she lacks knowledge she’ll seek assistance from her fellow mothers who she was together with at the center.” 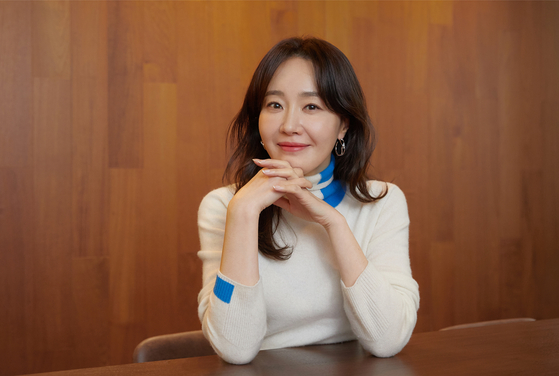 
The series tackled issues related to childbirth, its aftereffects and childrearing knowledge that are rarely discussed in mass media, and the actor also credits producer Park Su-won for smartly depicting the scenes.

“I was at first really worried [when I read the script] about how to depict scenes about breast massages or breastfeeding, or would the viewers feel uncomfortable seeing them,” Uhm said. “[But when I saw how they were edited] I could really feel that Park had deliberated a lot [on those scenes].”

Uhm evaluates that people root for and enjoy the originality of new topics that may have been frowned upon in the past.

“Although people always enjoy conventional themes, they also seem to like refreshing and new ones too,” she said. “As an actor too, it’s fun to be part of the challenge of constructing a new genre.”

Uhm thinks that if she does have children that her experience will be similar to that of her character's.

“If I become a mother, I would be like Hyun-jin, I guess, working and raising a child at the same time,” she said. “But [I want to say] to the working mothers by quoting a line said by actor Jang Hye-jin: ‘Being a good mother is not about being perfect. It’s not about being selfish. A child can only be truly happy when their mother is.’ You can only radiate and spread positive energy when you’re happy.”