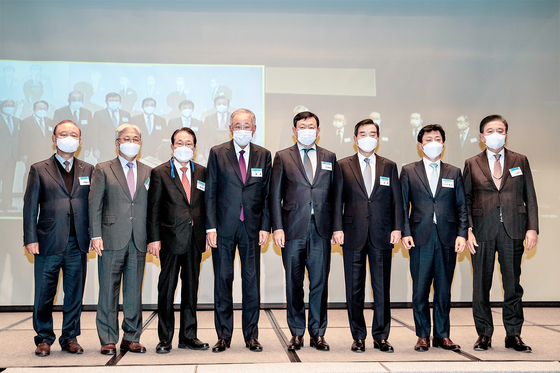 Business leaders and government officials take part in the 52nd Korea-Japan Business Conference Friday at the JW Marriott Hotel in Seoul. The conference was also simultaneously held at the Hotel Okura in Tokyo. [JANG JIN-YOUNG]

“Adding just one more source of conflict can be the last straw which breaks the camel’s back,” said Hong Seok-hyun, chairman of the Korea Peace Foundation and of JoongAng Holdings, during his keynote address. “We need to begin the process of historical reconciliation starting now, with the target of 2025,” which marks the 60th anniversary of the Korea-Japan treaty that normalized relations in 1965.

Hong then stressed the need for historical issues to be resolved by looking at a “shared future.”

The Korea-Japan Business Conference has been held annually since 1969. After being postponed due to the Covid-19 pandemic, business leaders spoke via video conference from the JW Marriott Hotel in Seoul and Hotel Okura in Tokyo.

“The two countries' leaders need to show political leadership,” said Hong, referring to the issue of the compensation of wartime forced laborers.

The Korean Supreme Court decisions in 2018 ordered Japanese companies to individually compensate Korean victims of forced labor during World War II, recognizing the illegality of Japan’s colonial rule. The decisions have been protested by Japan.

Hong noted that as the Korean government cannot intervene in judicial proceedings, a realistic step would be a special legislation to resolve the issue. However, he also stressed that it is important for the Japanese government to make clear in turn that it repents for its colonial rule over Korea.

“The Moon Jae-in government has the leisure to make such a decision since it is free from a pro-Japanese label and has legitimacy from the democratization process,” Hong said.

“The two countries’ governments, through an agreement, need to send a clear message to the Korean people,” he said.

Hong pointed to North Korea as a reason to speed along restoring relations between South Korea and Japan.

Deng at the time said, “Our generation is not wise enough to find common language on this question. The next generation will certainly be wiser. They will surely find a solution acceptable to all.”

The Treaty of Peace and Friendship between Japan and China was signed in 1978, and after Deng’s visit, Japan provided official development assistance to China for some 40 years, seen as an expression of the Japanese government’s remorse for its wartime atrocities.

“The two countries always had their ups and downs, but the trust and friendship built up for many years between Korean and Japanese businesspeople will become an important foundation for the improvement of Korea-Japan relations,” Nam said during the conference.

“We discussed doing our best to build an atmosphere to enable a summit between our two countries’ leaders," he said. “Like our two countries did for the 2018 PyeongChang Winter Olympics, we will work toward mutual cooperation to hold a successful Tokyo Olympics next year.”