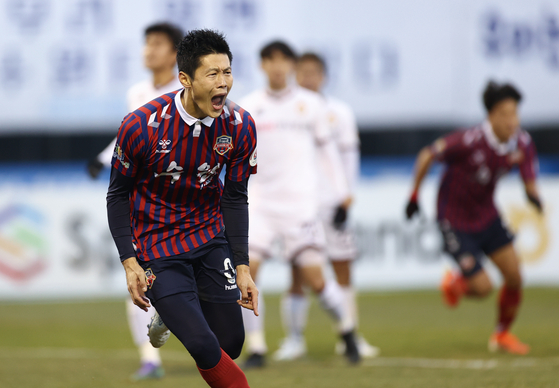 An Byong-jun of Suwon FC celebrates after scoring a penalty in the 99th minute of the promotion playoff against Gyeongnam FC at Suwon Sports Complex in Suwon, Gyeonggi, on Sunday. With the goal, Suwon secured promotion to the K League 1 next season. [YONHAP]


Suwon FC secured their ticket to the K League 1 in dramatic fashion on Sunday, scoring a crucial penalty in the final seconds of the promotion playoff.

Having finished second in the K League 2 this season, Suwon only needed a draw with third-place Gyeongnam FC at Suwon Sports Complex in Suwon, Gyeonggi, on Sunday to ensure their return to the top tier for the first time since 2016.

Even that looked unlikely, however, as Gyeongnam's Choi Jun scored with the help of a deflection in the 27th minute and Suwon seemed unable to respond for the rest of the game.

It wasn't until five minutes into injury time at the end of the second half that the Gyeonggi club finally had a chance.

After a tight play in the penalty box was reviewed by the video assistant referee, Gyeongnam's Kim Hyung-won was hit with a yellow card for obstructing Suwon midfielder Jung Seon-ho, giving Suwon a last-second penalty in the 99th minute of the game.

Suwon's An Byong-jun stepped up to the spot and booted the ball past Gyeongnam goalkeeper Son Jung-hyun to tie the score at 1-1 in the very last play of the game. That draw means that Suwon advances to the K League 1.

An, a Japan-born North Korean forward, was also named K League 2 MVP this week. An is the first North Korea-affiliated player to ever win the award.

Suwon have only played in the K League 1 once, in 2016, before being relegated back to the K League 2 after finishing last that season.

Gyeongnam are far more familiar with the top tier, having only spent four seasons in their 15 year history in the K League 2. Gyeongnam were relegated last year and had hoped to bounce straight back up for next season, but the draw on Sunday has closed that door for now.

Suwon will join K League 2 winners Jeju United for the move up to the K League 1, while Busan IPark and the military team Sangju Sangmu FC are both relegated down to K League 2.