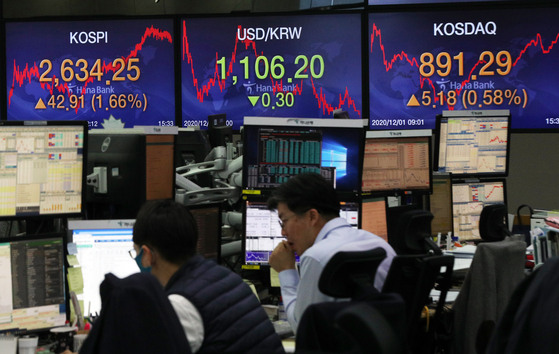 The closing figures for the Kospi, Kosdaq and the dollar price against the won are displayed in a dealing room at Hana Bank in Jung District, central Seoul, on Tuesday. [NEWS1]

Stocks rebounded from a sharp decline the previous session to hit a new all-time high Tuesday on the back of upbeat economic data, lifting hopes for a faster-than-expected recovery amid the pandemic. The won rose against the dollar.

The benchmark index got off to a strong start as investor sentiment was buoyed by promising economic data.

Korea's economy grew 2.1 percent in the July-September period from the previous quarter, faster than its earlier estimate of 1.9 percent.

The local currency closed at 1,106.2 won per dollar, down 0.3 won from the previous session's close.