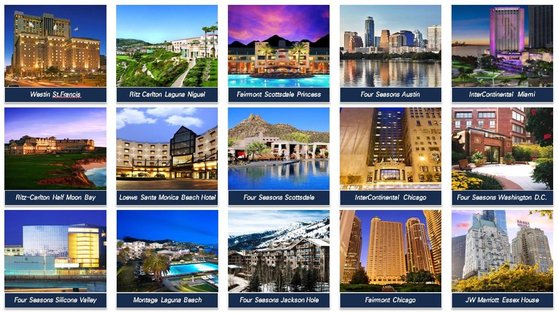 Images of the 15 luxury hotels in the United States that were slated to be sold to Mirae Asset Global Investments. [YONHAP]

“The deal has been canceled as Mirae Asset Global Investments on Nov. 30 local time won the lawsuit filed by Anbang Insurance Group in April regarding the completion of the U.S. hotel acquisition deal,” the Korean investment company said in a statement Tuesday.

“According to the court, Anbang Insurance Group failed to fulfill the terms of the deal and couldn't secure title insurance [of the hotels] which makes it suitable for the purchaser, Mirae Asset Global Investments, to call off the deal.”

The court also said that Mirae Asset has the right to be compensated for the deposit worth $580 million, as well as for expenses of $3.68 million. Full reimbursement of legal expenses will also be requested separately.

Last September, Mirae Asset Global Investments signed a $5.8 billion deal with Anbang to acquire 15 luxury hotels in the United States from the Chinese insurance company and paid 10 percent of the transaction amount as a deposit. The contract was supposed to be completed this April.

Anbang Insurance, however, failed to fulfill the conditions of the deal, which included securing the title insurance on the hotels. According to the Korean investment company, Anbang intentionally hid the fact that some of the hotels included in the deal were engaged in lawsuits over their ownership. Mirae Asset scrapped the deal and Anbang filed the lawsuit against the Korean company at the Delaware Court of Chancery to force the transaction to be completed.