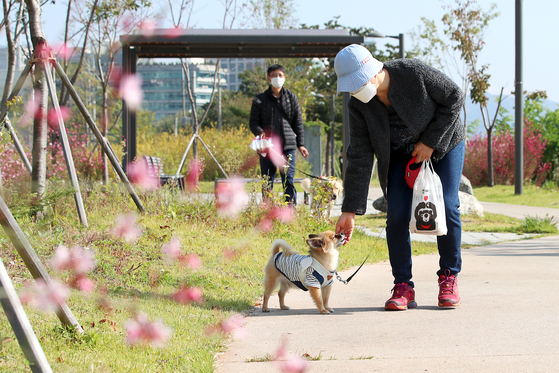 A dog owner walks her pet around a park in Seoul. [NEWS1]


If you have a sick pet, odds are it is a domestic shorthair cat named Coco, and Coco has a stiff paw and a tummy ache, at least according to the number crunchers over at Meritz Fire & Marine Insurance.

The insurer released the information on the second anniversary of the introduction of its long-term pet insurance plan and based its conclusions on actuarial data related to 30,000 dogs and 3,000 cats.

Joint-related illnesses were actually the top complaint and resulted in the payment of 550 million won ($497,000) in claims. Ear infections were also high on the list. Toy poodles were popular, Meritz said.

The cats did not respond to the Meritz data, and the dogs were unavailable for comment.

More than 50 percent of pet owners who sign up for the pet insurance live in the Seoul and Gyeonggi region. Some third of the dog owners are in their 40s. Cat owners were younger, with most of the customers under 40.

“Coco” was the most popular name for both dogs and cats, the survey showed.

The pet insurance business is booming in Korea as more people are willing to adopt a furry friend as a family member. A total of 22,000 new pet insurance policies were sold last year, according to the General Insurance Association of Korea, up 172 percent compared to a year earlier.

Meritz plans to donate a part of proceeds from policy sales to the Korea Animal Welfare Association.

While options are increasing, with 10 companies currently offering insurance for pets, experts say Koreans are less inclined to buy these policies than pet owners in other countries.

Only 0.25 percent of pet owners in Korea have their dogs and cats insured. This is far below other countries, where pet insurance is more common such as the United States with 10 percent, Britain with 25 percent and Sweden with over 40 percent.