SillaJen, once the Kosdaq’s second-largest company, has been given one year by the Korea Exchange (KRX) to get its act together.

To stay listed, the biotechnology company must improve its management transparency and business.

“At a meeting on Nov. 30, the Korea Exchange decided to give a one-year grace period for improvement,” the exchange wrote in a regulatory filing Monday. “SillaJen is obliged to submit a report on how it improved in business and its result within seven days of Nov. 30, 2021.”

The exchange will convene another meeting then and if the result falls short, the company will again face risk of delisting.
SillaJen's shares were suspended of trading on May 4 after its CEO Moon Eun-sang and other key executives were indicted on charges of embezzlement and breach of duty.

Moon was arrested in May on insider trading charges after allegedly selling millions of SillaJen shares just before a failed clinical trial caused the stock price to tank the year before. 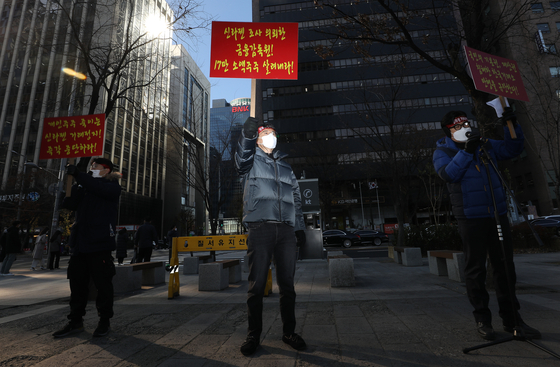 Members of SillaJen's activist shareholders stage a demonstration in front of Korea Exchange in Yeouido, western Seoul on Nov. 30. [NEWS1]


In August 2019, SillaJen’s shares plummeted on the news that Pexa-Vec, an anticancer drug candidate, had failed its Phase 3 clinical trial. Moon was found to have sold 2.92 million shares of the bio company and profited around 250 billion won ($226 million) from it.

Moon is also alleged to have acquired 35 billion won worth of bonds with warrants through a paper company in 2014 before the company went public and profited more than 190 billion won from the Kosdaq listing.

KRX's corporate review committee was expected to decide on whether to delist SillaJen from the market in August but it couldn't come to a conclusion then.

Retail investors held a sit-in protest in front of the KRX headquarters in Yeouido, western Seoul and in front of the Blue House in Jung District, central Seoul on Nov. 30, requesting a swift resumption of trading in SillaJen, which remains suspended even though it is still listed.

SillaJen said it would "try its best to improve business to resume trading within the next one year."