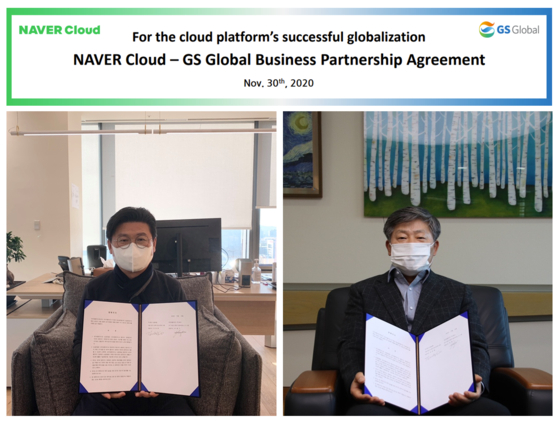 
Naver Cloud will work with GS Global to expand its public cloud service to foreign markets, using the latter company's knowledge and experience operating in overseas markets to help its expansion.

Public clouds are cloud environments primarily created from IT infrastructure owned by operators serving multiple customers. For Naver Cloud, all data and systems run from servers and storage physically based at a Naver facility.

Naver said the agreement signed Sunday will give the companies access to each other’s expertise. GS Global’s role in the partnership is to understand the foreign market and acquire a customer base for the cloud service while Naver Cloud will offer its technology to provide services catered to each country and assist with technical sales support and operation maintenance of the cloud services.

The first overseas target will be the Southeast Asian market.

Naver Cloud has infrastructure hubs in 10 regions abroad, in countries including the United States, Singapore, Germany, Japan and Hong Kong.

“Naver Cloud Platform provides cloud services for the greatest number of global regions out of all Korean cloud service companies and holds a strong enough competitive advantage for it to succeed in entering foreign markets,” said Naver Cloud CEO Park Weon-gi. “We plan to partner with GS Global for the globalization of Korea’s cloud and will continue to discuss strategic cooperation measures.”

'Brainless' robot biz to be making money for Naver from 2023

Naver Cloud teams up with Intel in Southeast Asia

Naver's new HQ has its own 5G network, 'brainless' robots