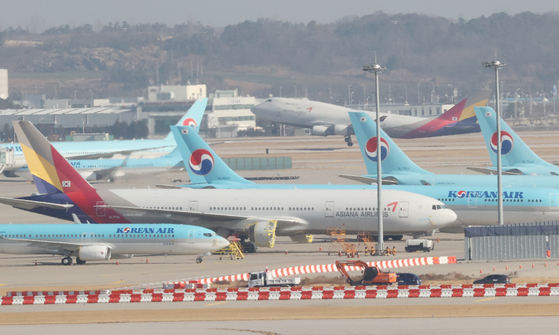 A court has rejected a request that would have stopped the Korean Air Lines takeover of Asiana Airlines dead in its tracks.

With the roadblock removed, the airline deal of the century, which is seen transforming the industry in Korea and possibly spearheading a wave of consolidation in Asia, is on.

It has argued that issuing new shares in Hanjin KAL through a third-party allocation will dilute the holdings of existing shareholders.

The company asked for the court to issue an injunction prohibiting the sale of Hanjin KAL stock to KDB.

In the proposed deal, KDB will invest in Hanjin KAL, which will buy shares of Korean Air Lines to help in its acquisition of Asiana Airlines.

Seoul Central District Court rejected the arguments by KCGI, which owns 19.55 percent of Hanjin KAL and is the company’s largest shareholder. It said that the issuing of stock is within the bounds of the law and company rules and said that the sale would not support the interests of Cho.

It also made a broad public interest and business argument in favor of the stock sale and the resulting acquisition.

"If Korean Air Lines acquires Asiana Airlines, it could secure an exclusive position in the market as the only national carrier," the court wrote. "That could help [airlines] overcome financial challenges and secure global competitiveness, and therefore, [the court] accepts KDB's proposal."

Hanjin KAL “respects the ruling of the court and will do its best to overcome the crisis through the acquisition while improving share value and contributing to the economic growth,” said the company, which owns 29.27 percent of Korean Air Lines.

The company further vowed to do its best to stabilize employment and told KCGI and allies to get onboard.

The KCGI-led coalition controls 45.23 percent of Hanjin KAL. Cho Won-tae and his allies own 41.04 percent of shares, under the assumption that Delta Air Lines votes with Cho. The Atlanta-based airline, which owns 14.9 percent of the stock and is Hanjin KAL’s No. 3 shareholder, hasn’t publicly announced its position.

KDB described the court’s ruling as “wise” and urged KCGI to drop its objections.

KDB “requested KCGI to responsibly make productive and constructive proposals amid the serious crisis,” the state-owned bank said in a statement following the ruling.

KDB will be releasing 500 billion won to Hanjin KAL for the shares Wednesday, and the stock will be delivered on Dec. 22.


KCGI on the same day released a statement.

"We are concerned the decision will have a negative impact on the capital markets and the principles of the market,” it wrote.