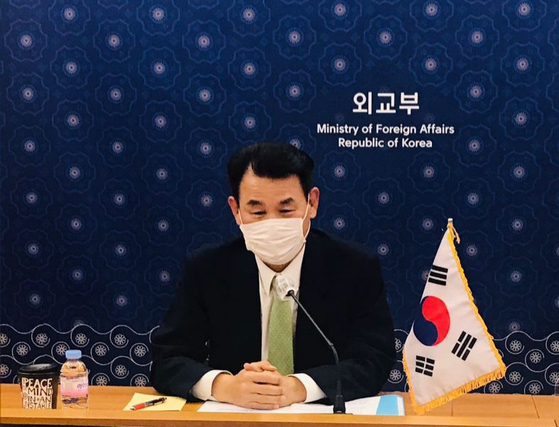 
The Korean and U.S. negotiators for the defense cost-sharing agreement held their first talks since the U.S. presidential election, agreeing to swiftly reach a “fair and mutually acceptable deal,” Seoul’s Ministry of Foreign Affairs said Tuesday.

The talks were held over videoconference Monday evening between Jeong Eun-bo, Korea’s chief negotiator for the 11th Special Measures Agreement (SMA), and his new U.S. counterpart, Donna Welton, in an icebreaker session that also involved officials from Korea’s Foreign Ministry and Defense Ministry and the U.S. State Department and Pentagon.

Welton replaced James DeHart as the new senior adviser for security negotiations and agreements in the State Department’s Bureau of Political-Military Affairs in August amid deadlocked bilateral defense cost-sharing talks. DeHart had helmed the U.S. team for the defense cost-sharing negotiations over Seoul’s contribution toward the cost of stationing some 28,500 American troops in Korea since September 2019.

In the latest video meeting between Seoul and Washington, the two sides agreed to "closely work together to swiftly reach an agreement that is fair and mutually acceptable," the Foreign Ministry said in a statement.

The two sides have held seven rounds of talks for the 11th SMA, and the last face-to-face talks were held in March in Los Angeles.

A tentative agreement reached by the two negotiating teams in late March was rejected by U.S. President Donald Trump, who has urged Korea to pay an exponentially higher contribution. Seoul at that time offered a 13 percent increase from the previous year while Washington reportedly demanded a 50 percent increase, down from its initial demands for a fivefold hike.

In the 10th SMA signed in February 2019 that expired in December last year, Seoul agreed to pay 1.04 trillion won ($939 billion), 8.2 percent more than what it spent the previous year.

U.S. President-elect Joe Biden, in a turnaround from the “America first” policy of the Trump administration, said in an editorial published by Yonhap News Agency in October that his administration will stand with Korea and strengthen the “alliance to safeguard peace in East Asia and beyond, rather than extorting Seoul with reckless threats to remove our troops."

Experts have suggested that a new U.S. administration could lead to a change of tone in the SMA talks, which have dragged on for over a year, and speed along sealing a new deal.

“Korea and the United States have conducted numerous negotiations and communications on this issue in order to reach an agreement that is mutually acceptable,” Foreign Ministry spokesman Choi Young-sam said in a briefing Tuesday. “The latest talks took place in such a context. Such talks were for Korea and the United States to review the negotiation situation thus far.”

The latest videoconference session was not officially counted as the eighth round of talks for the 11th SMA negotiations, but served as an opportunity for the negotiators of both sides to break the ice.

A Foreign Ministry official said Tuesday, “The two sides’ negotiating teams have continued to exchange emails and communicate. However, this meeting was an opportunity for many Foreign Ministry and Defense Ministry officials to participate in order to continue the negotiations. As the [U.S.] government is transitioning, we reached a consensus that it would be good to maintain the momentum of negotiations.”

The official added, “Rather than any detailed progress, this was about confirming the fundamental principles” to go forward with negotiating a deal, noting that the atmosphere of the talks had been “good.”